UnNews:Santa Claus shot down and killed over North Korea 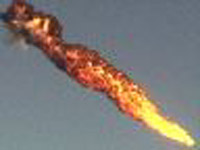 South Korean military photo of Santa's sled engulfed in a fireball after being shot down by the North Koreans.

Pyongyang, North Korea - Santa Claus, the jolly old elf loved by billions of children worldwide, has died. He was shot down early this morning while on his way to South Korea to deliver presents to the country's few thousand Christian children. While flying near the Korean DMZ, Claus was struck and killed by a surface-to-air missile thought to have been launched by the North Koreans.

The missile exploded on impact, obilterating Santa and his sleigh. His remains and those of his nine flying reindeer landed on the South Korean side of the border and were quickly recovered by the South Korean military. "We've recovered most of the remains but there isn't much left. There are bits of human remains and some of the red fabric of Santa's suit but there isn't much left of the big guy. All that is left of the reindeer are bits of skin and reindeer fur although Rudolph's head was actually mostly intact" said South Korean General Cho Seung Hui.

The devastating news comes as millions of children across Europe and North America wake up to no Christmas presents. Because Santa starts his journey in the eastern hemisphere, he had just started his run when he was shot down and killed. He had just finished delivering to eastern Russia and was headed down to Korea and Japan when he was killed. He even stopped off in North Korea to give food to the millions of starving North Koreans before he was killed crossing over in to the South. Children in Australia were also left without presents this Christmas. 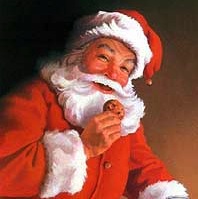 Santa enjoys milk and cookies while visiting a home in Canada, circa 1994

The North Korean government has issue a statement accepting responsibility for Claus' death but say that they thought Santa was an American fighter jet and only shot him down out of self-defence. US President Barack Obama rejected this claim. He believes Claus was an opportunistic victim of new leader Kim Jong-un asserting his power. "It is unfortunate that Santa Claus has become an unwitting victim to North Korean internal politics. Kim Jong-un will pay for destroying our children's hopes and dreams. We've already taken out his old man, he should realize that we can do the same to him".

Worldwide reaction to Kris Kringle's death has been a mixture of grief and outrage. Many American citizens count on Santa Claus to bring their children Christmas presents especially since the Second Great Depression began in 2008 and are devastated by his death. Protests have sprung up all across North America and Europe after news of his death broke several hours ago. Citizens are demanding that their government declare war on North Korea and punish those responsible for Santa's death. They are also demanding that their governments foot the bill for Christmas now that old St. Nick is dead. President Barack Obama promised covert assassination of the North Korean leadership but told the American people that the government simply can not afford to pick up the tab for Christmas. He told parents that they needed to pay for their children's presents themselves from now on or convert to the Jehovah Witness faith.

A full state funeral for Santa Claus is expected to be held at the North Pole on New Year's Day. Numerous world leaders will be in attendance, including President Obama. Santa Claus is also being posthumously awarded the Nobel Peace Prize for bravery and humanitarian service. The medal will be presented to his widow, Mrs. Claus, at Santa's funeral. Funeral services for Santa's reindeer are expected to be held December 31st and will be a private ceremony, attended only by Mrs. Claus, the elves, and a few close family friends. Asked if there will be anyone willing to carry on Santa's legacy of philanthropy, Mrs. Claus told UnNews that its "too early to tell at this point".