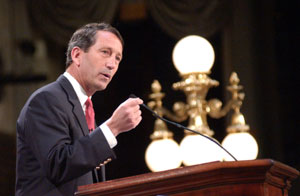 COLUMBIA, South Carolina -- Delegates from what has been called America's least-necessary state met today in Columbia to declare their intentions to secede from the Union. This third time South Carolina has seceded in its history and the two-hundred twenty-fifth time this backwards Southern state has brought shame and criticism upon itself since it was founded in 1669.

"We South Carolinians take pride in scaring the bejebus out the rest of American society," Governor Mark Sanford said as he officially started the meeting. "From John C. Calhoun, through Preston Brooks and Andrew Butler, and all the way to Strom Thurmond, we South Carolinians have consistently elected the most horrible, despicable, backwards, and psychopathic people in the nation to positions of power. I am truly humbled to be able to initiate this historic secession. Thank you, people of South Carolina." 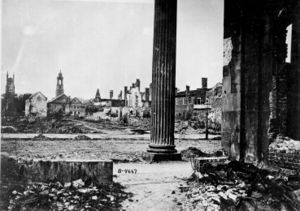 Charleston is a thoroughly modern city epitomizing the digital age.

The state legislature then proceeded to draft up a document, tentatively entitled 101 Reasons the Federal Gov't Sux0rz, explaining their reasons for their secession. Included are the usual things about Northern and Western politicians tyrannically dominating our democracy solely because they get more votes than Southern leaders and the fact that the Feds are forcing the state to give Negroes basic human rights. There are, however, some new excuses for destroying the fabric of the American Republic. "We are really pissed we don't have any professional sports teams," the legislature proclaimed. "Seriously, even Utah has an NBA team!" Other new complaints include the fact Democrats have taken over Washington, hell is freezing over, and three of the four horsemen of the apocalypse will be sworn in as key Senate committee leaders in the United States Congress.

President Bush has been ambivalent toward the events in Columbia. "The people of South Carolina should be praised for electing Republicans, but, goldernit, I jes' don't see why they seceded again. Secession went out with Jim Crow laws. Now we enslave blacks by using taxpayer dollars to sell cocaine on the streets. Don't write down that last part, okay?"