UnNews:Satanic opossums try and take over the world 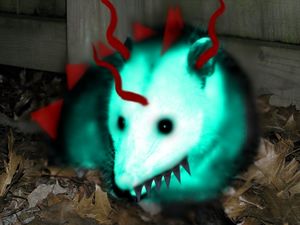 Satanic opossums are invading the Earth! Run and hide!

THIRD LEVEL, Hell -- In retaliation for prayers by Seventh Day Adventists, Satan has set radioactive, evil opossums with super-powers to prowl the Earth for every last righteous man, intent on ripping them limb from limb. The glowing green little monsters with titanium teeth, telekinetic abilities and an appetite for human lungs have been let loose in one strategic location on each continent of the planet.

Iran is putting the full weight of their nuclear program into the destruction of these evil beasts. An emergency session has been called by the United Nations to discuss all member nations' defensive capabilities against such a fearsome enemy.