UnNews:Racist messages found in the music of Carlos Santana


QUEENS COUNTY, New York, United States - The ubiquitous American lawsuit gained yet another supporter this week, as Qin Sui, a first-generation immigrant from some Asian country, sued Arista Records for releasing what he considers "a racist and bigoted song" on a "mediocre at best album." The suit didn't come as much of a surprise to the subsidiary label of Sony BMG, because they say they field several such allegations daily. However, that these proceedings, officially filed last Monday, have yet to be laid to rest suggests that there is some merit to the accusation.

According to Qin Sui's press release, he is calling for the "execution of all executives directly or indirectly responsible for the release of this despicable song." His rage is directed toward the popular 2003 single "Why Don't You & I", originally recorded by Santana in 2002 for his album "Shaman" ("Native American Magic Person" on the American release, for the sake of political correctness). According to Sui, the chorus' lyrics, which many have interpreted to simply be an all-too-innocent take on young love, are actually a racist message in disguise. 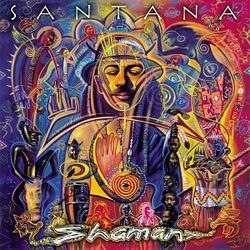 The cover of the offending album

The chorus, which goes "Why don't you and I get together/Take on the world and be together forever?/Heads we will, tails we'll try again", along with the rest of the song, was performed by 80s Spanish-Rock staple Santana as part of his comeback effort. Sui claims that this line, penned not by Santana but by Nickelback frontman and professional crybaby Chad Kroeger, actually queries the listener "Why don't Yu and Ai get together/To take on the world..."

Sui, who has amassed an incredibly large amount of supporters for his cause from all walks of life, has picketed the offices of Sony BMG for the past week. Signs reading "Die you bastards!" and "I hope you lose your pathetic life in a painful and long-lasting fire from hell" have deeply unsettled record company executives. "To be honest," President of Music and Stuff Gregory Freeman said, "I've never been on this side of a lawsuit before. It's really very scary to know that your fate is in the hands of another."

Despite this, the RIAA has filed a countersuit against Sui for his "libelous and violent threats against [their] kindred." Qin dismisses this lawsuit as frivolous. "It's just in my family history to be violent. People are, for the most part, self-serving bastards who need to be guided through force," he said regarding the case. Additionally, he has filed a counter-countersuit alleging that the RIAA is trying to intrude upon his right to sue somebody. The RIAA has, in response, done the same.

Neither Santana or Kroeger could be reached for comment.