UnNews:Politicians move on after Arizona massacre 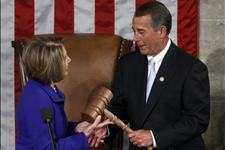 Speaker Boehner gets the big gavel from Nancy Pelosi and gets ready for a big game of Whack-a-Mole.

Urge civility on their respective power bases? Tone down the rhetoric? No--use the tragedy to maximize their own political gain.

The President scored first in the macabre game. Leading the nation today in a moment of silence instantly won the approval of millions of Americans, as it was his first appearance in the last twenty-three months where he didn't hump his health care law. Moments later, speaking of which, he muttered to the Speaker, "You wouldn't do anything as crass as vote to repeal my new law so soon after this crisis, would you?"

"No, I guess not," said a sheepish Mr. Boehner, and whispered to his aide to find something else to mail Rush Limbaugh for his birthday. The bill to repeal Obamacare was to sail through the House, to the sparkle of flash bulbs and the popping of corks, before certain death in the Senate. The vote would assure House members that they had come to Washington to do something, and free them to settle down to horse-trading and business as usual. Instead, the House will now meet briefly and vote condolences to the shooting victims.

As reported, Speaker Boehner has already had a scare, as one hundred young legislators mistakenly arrived last week at the capital of Washington state. However, ex-Speaker Nancy Pelosi didn't know that, and was convinced to leave her personal Air Force jet, which was then used to ferry the lawmakers across the country to the right Washington to make the transfer of power official.

The new wave of "Tea Party" legislators defiantly led a public reading of the U.S. Constitution, which some claim limits their powers. But minority members of the minority convinced Republicans to include the stuff about slavery, so they could blame the United States for things, one last time. And the Republicans' greatest hope was not realized: On hearing the words of the document, Ms. Pelosi's body did not burst into flames.