This page was originally sporked from UnNews:Old man yells at cloud.

AUSTIN, TEXAS -- As many readers may recall recently an older citizen, A. S. (83) was seen yelling at a cloud after running out of the nursing home and he had a heart attack a few minutes later. Our reporter had approached the old man to ask him a few questions but the man pulled out a knife and started screaming some unintelligible words. "I WANT MUSTARD!!" however, WAS crystal clear.

That same older citizen was seen in downtown Austin late Friday evening but this time, when our reporter approached him to ask a few questions, the man, in spotless white gloves, inquired ever-so-politely; "Pardon me, would you have any 'Grey Poupon'?". The most curious change of demeanor! No screaming! Better yet - no utensils! 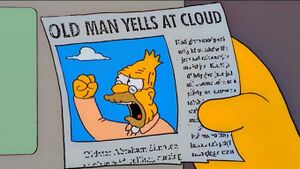 "To be fair, I don't know what the hell's going on!", a witness said for the UnNews - THE UnNews that is. "A. S. was going to the shop to buy lemons to make some lemonade for his granddaughter, as he told me. Now he is ever so polite & asking about mustard." We also tried interviewing the cloud again, but it had nothing to say about this situation - undoubtedly just as confused as we! Us? I? Hm. 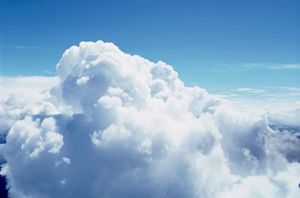 The cloud. The boring, boring cloud.

The two nurses in the nursing home 'Happy House' were shocked by the old man's behavior. "No clue! We continue fearing for our lives! And condiments - we're now afraid of those! For those? Hm.". Another nurse said: "None of our other seniors in the home has done something like this yet. Ever? Before? Hm. This is, again, unprecedented and shocking for every nursing home. I am expecting even more nurses quitting their jobs. In fact - I'm outta here. See ya!".

We have asked the director of the nursing home to say something about this situation. He responded: "Well?! DO you have any 'Grey Poupon'?!"

All parties are now in the hospital, recovering from heart attacks. We also asked the doctor about the patient's state. "He wants some mustard! Aren't you people listening?! Hearing?! Hm.", the doctor said.