UnNews:North Korea to separate onto their own island 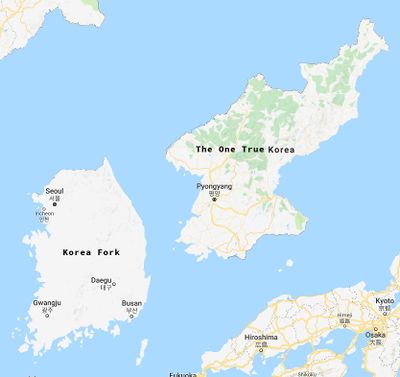 North Korea's rendering of what the split will look like once completed.

NORTH KOREA - The People's Republic of North Korea has recently voted in a completely fair and balanced election to separate their land mass from South Korea to form their own island, citing the needs to control North Korea's destiny for years to come. This comes a few days after South Korea stated that they were not going to tolerate North Korea anymore, with South Korea allegedly planning to invade North Korea and purge it of all "corruption and propaganda," according to UnNews sources.

The vote, which has 100% of North Koreans supporting the move, ignited controversy due to the strict rules set by their government. According to various sources, North Koreans were required to make "5 contributions" to North Korean general Kim Jong-un in the form of moves showing "extreme loyalty", which was left undescribed. In addition, they had to do it between January 5th, 2018 and February 26th, 2019 in order for them to be eligible to vote.

Kim Jong-un denies all allegations, stating that the "North Korean people want to be masters of their own destiny and not be held down by false prophets who claim to be gods.", he then went on in detail about how South Korea was a shithole, stating that the people there were "power-hungry and selfish".

The split is expected to happen on March 31st, 2019, at which point North Korea will then scientifically "split the earth" to separate North Korea from South Korea; they will then rename themselves "The One True Korea". At press time, South Korean president Moon Jae-in condemned the decision stating that it'll only serve the "power-hungry, magnalioical and egotistical".