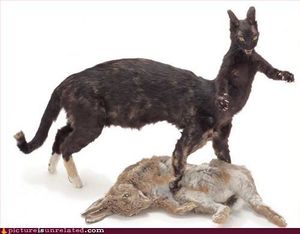 Ultimate Fighting Mutant cat warms up on a rabbit before competition.

THE INTERNET -- Since December 17, 2009, Conservapedia News has been running a series on secret cloning cross-species experiments, funded by liberal think tank The Alchemy Group.

Inspired by the intrepid reportage of Conservapedia News, UnNews has followed up on their work, and has itself broken a new story on this front, the development of mutated, cloned predatory animals into trained ultimate fighters.

Our sources at Strategic Sciences Labs in New Mexico have said that, in addition human/canine and human/feline crosses, they are creating virtual new life forms, like the cat with six legs pictured above.

Vince McMahon, chairman and CEO of professional wrestling promotion World Wrestling Entertainment (WWE), has signed on to underwrite research that will result in the creation of a new concern, Ultimate Mutant Fighting (UMF). This venue will pitch bizarre ferocious mutated beasts against one another in bloody, no-holds barred matches.