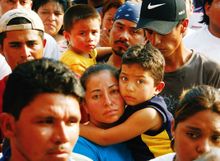 Focusing on foreign invaders--99% of whom are Hispanic--marks the law as anti-Latino, according to the ACLU.

FREMONT, Nebraska -- The City Council here suspended a voter-approved law to deal with illegal workers, preferring instead to spend the next two years in court.

The law required anyone hiring or renting property to verify the applicant's nationality, using the spiffy new Homeland Security system that lets everyone know everything about everyone else. The law would also have applied to anyone giving a hitchhiker a lift, to anyone lighting someone else's cigarette, and to anyone discussing politics with a stranger at the bar.

Amy Miller, legal director of the Nebraska American Civil Liberties Union, said, "We're pleased that no one will worry about losing housing and jobs because of their appearance or accent. Or the fact that they just snuck into the country." The ACLU tirelessly defends civil rights--at least, those of bums, welfare cheats, and foreigners.

The City Council voted 8-0 to delay the ban. Some of the 100 who attended the meeting said the law had already led to divisiveness. "Dees law, she ees increasing conflict and discrimination," Lesley Velez of Fremont said. ("Of Fremont" means of Ciudad Juárez and living in a cardboard shack on the edge of Fremont.)

The Council will next consider suspending the law against murder, another law creating conflict and dividing the community, as those accused, as well as those murdered, are disproportionately nonwhite. The Council claimed it would cost $1 million to enforce the immigration law, but it costs even more to prosecute murderers.

The Council voted to hire lawyer Kris Kobach, who wrote the law, as well as the Arizona law that takes effect on July 29. Former President Bush defended illegals, telling the nation they "only do the jobs Americans refuse to do," at least for crap wages. But the nation voted for change, and President Obama is now suing Arizona for doing the border enforcement that America refuses to do.