UnNews:My thirteen colonies are better than your entire grand empire 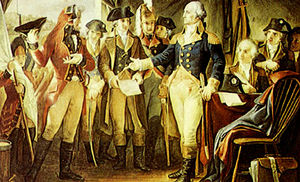 Take in that sweet smell of defeat, Cornwallis. Take it in.

PHILIDELPHIA, United States of America - I'm getting right tired of it. All of these issues we are having between the commoners and the crown; 'The colonies deserve equal rights as those on the mainland!' 'No, the colonies are just the itch on our scrotums. They deserve no rights whatsoever, and especially should not be represented in our governments!' This arguing, and this fighting is getting quite tiresome. But most of all, the argument is lacking intelligence. But seriously, oh redcoats, do you really think you are so tough? Pish Posh! The 13 small colonies in the Americas are better than the entire grand empire of Great Britain!

Look, the argument was indubitably small-minded to begin with. We already had to fight, and beat, both the French and the Indians for you. We have had to deal with wild beasts, the likes of which you high-class Brits haven't seen in 400 years. We even contracted a brand new disease from these loose native women. But now, it has been settled. Did our 13 pitiful and classless colonies defeat the British this last fortnight? NAE! The colonies defeated and ran-out the entire grand empire of Great Britain this day! Do you understand who you were defeated by? Has the finality of our victory set in yet? You just got your red-coats re-reddened by the French. Indeed, you silly-faced Brits. Your age-old rival has finally bested you, and you lost more than pride this time. You lost your beautiful 13 colonies in the Americas. And our military, with our glorious leader, George Washington, were able to turn around centuries and centuries of military failures from the French, and win them a war.

And here, now, is another issue for your reputation, Great Britain, one of our best Generals turned out to be a turncoat. That is correct. We were already outmanned, outgunned, and overwhelmed, and on top of all of that, perhaps our most intelligent strategist switched sides on us. And still, on this Fourth of July, of our Lord's Seventeen Hundredth and Seventy Sixth Year, we were able to carry the day. With Benedict Arnold on our side, we probably would have defeated your side so handily you would have been carrying on and tearing up with great conviction. Methinks, perhaps, next time, don't be as over-sure of yourself, and your chances will be greatly increased on the battlefield. Then again, I am unable to foresee the day when the British military is not constantly taking their enemies for granted. Pardon me for even mentioning it.

So how does it feel, Brits? Did you enjoy getting defeated by Horatio Gates? Even I, in all of my great knowledge of the American colonies' forces, had no idea that that man was a General. And he was still able to defeat you soundly in battle. Once we gained our footing, we were able to trounce you all as if it were no harder than going for an afternoon stroll in Billingsly Park. It was, as if you had not attacked us, we would not have even noticed. It was truly that easy. It can be said that, in the end, it were more of a nuisance for our soldiers to scrape the droppings from their horses off of their boots than to go out and defeat the entire British Army.

I do feel sorry for you, however, oh Britain. Must it feel awful to have been defeated so easily by mere colonies? I am unable to comprehend how all of the citizens of your country must feel, to know that they are so weak and unimportant now. To be so easily defeated by 13 mere colonies.... It is an embarrassment, to say the least. In step with this, I bid you adieu Britain. Your time as the greatest militree power in the world has ended. The sun has set upon the British Empire at last. In her defense, she did need a rest. With these parting words, go back to your tiny island-country now. Have a good trip home. I would like to offer you luck on trying to combat scurvy, but I know that it would be incredibly ignorant for me to ask for that. It is impossible for a country as terrible as yours to actually provide that well for their soldiers. Just try not to get too depressed about this defeat England. It is too fun beating you so soundly for us to not do this again. I beg of you, please return in a few years, and let us show you once more that out 13 colonies are better than your entire empire.

This page was originally sporked from UnNews:My country is better than your whole fucking continent!.