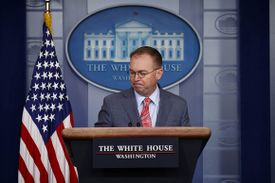 Wait, hold on one moment. That's not what I said.

WASHINGTON, D.C. — This past Friday, Acting White House Chief of Staff Mick Mulvaney held a press conference at the White House during which he touched on the House of Representatives' ongoing impeachment inquiry into President Donald Trump for his alleged withholding of military aid to the Ukraine in exchange for them investigating the foreign business dealings of his political rival, former Vice President Joe Biden's son, Hunter Biden.

During this press conference, Mulvaney noted how the Trump administration withheld money from the Ukraine because they refused to investigate certain Democrats. When ABC News Chief White House Correspondent Jon Karl noted to Mulvaney, "To be clear. What you just described is a quid pro quo. It is funding will not flow unless the investigation into the Democratic server happened, as well," Mulvaney replied, "We do that all the time with foreign policy."

Wait, wait, except that's not what happened. Hold on just one moment.

Really, what should be reported on is all the Bidens' wrongdoings in the Ukraine. You know, this kind of stuff happens all the time. I'm really not sure why you all are so worried about it. I mean, get over it. I mean, come on. We were withholding the money from the Ukraine for other reasons. Totally unrelated to any investigations. No quid pro quo.

The president's lawyer, former New York Mayor Rudy Giuliani, could not be reached for comment.