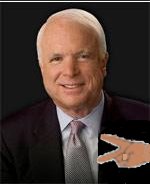 WASHINGTON -- Arizona Senator, POW, 2000 and 2008 Presidential candidate, and maverick John McCain has died, one day after discontinuing treatment for brain cancer. He was 81 and four days shy of his 82nd birthday.

Full disclosure: I didn't always agree with the guy, I'm a Democrat, and I voted for Obama. Not to mention the Sarah Palin debacle. But putting politics aside, McCain was an honorable man and a decent human being, which is becoming a rarity for Republicans, who nowadays worship their Great Orange God™ like he's the Second Coming of Christ. Both parties have come together to honor the senator.

In 1965, McCain appeared as a contestant on the original Art Fleming-hosted Jeopardy!

As a Naval bomber pilot during Vietnam, he was captured as a POW. He spent five-and-a-half years feeling like he had let his country down. Walking on crutches, he met Richard Nixon. He volunteered for the service and refused to leave early, despite extraordinary odds.

The battles continued in the United States Senate and on the campaign trail in the 2000 and 2008 elections. The lost the 2000 nomination to George W. Bush. He lost his final shot at the presidency to Obama. He had friends (and enemies) on both sides of the political spectrum. A maverick, he didn't always vote along party lines. Conversely, he did a lot of things to piss off Democrats like myself. I didn't know what to make of the stunt he pulled on the healthcare bill vote, but the good news was that he ultimately voted "no" on the ill-advised (and half-assed) attempt to repeal and replace Obamacare.

Then there was the embarrassing questioning of James Comey after he had been fired as FBI Director, which included inquiring about the Hillary Clinton investigation (which had nothing to do with the Trump-Russia investigation) to McCain erroneously addressing the fired FBI Director as "President Comey." He voted in favor of Iraq, which I was against from Day One. Afghanistan? Fine. But Saddam Hussein DID NOT have chemical weapons, Nuclear weapons, "nukular" weapons, or WMDs of any kind.

But regardless of political differences, you have to respect the guy overall. He was an American hero and patriot who put country over party and always tried to do what was right, or what he thought was right.

RIP Senator, and thank you for your service.