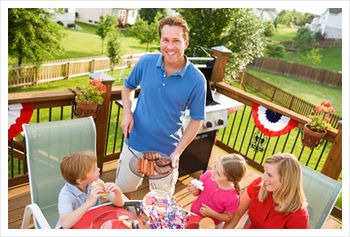 Imagine how nice this 9/11 would be without Islamic controversy mucking things up.

AMERICAAAA! -- The pure-beef brauts and hand-rubbed riblets on Patrick Lanceler's grill have, this year, been marred by the bitter taste of Islam. For 2010's annual September 11th - the much celebrated, oft-never forgotten holiday marked with fireworks and cook-outs, country music and hot dog stands, patriotism and balloons for grandma - has been plagued with vehement, shocking, hypersensationalized controversy over the religion of Islam, and a number of things related to Islam (such as Muslims, Qurans, Mosques and the little yoga mats they use to pray[1]).

The two most prominent issues causing controversy revolve around an Islamic glorification center planned for construction near the site of the 9/11 attacks, and a Quran-burning party in Gainesville, Florida. The two situations are often represented graphically by a precisely even scale (as they are both equally idiotic).

These various issues[2] have provoked a dampening malaise in much of the already seriously-downtrodden country. In the words of Archerton, Ohio's Clara Tobin: "I was really looking forward to my company's flag salute and chili cookoff this year. But I mean now, really, how can I? Did you know they're trying to put a Mosque at ground zero?! Leave it to the Muslims to ruin a really nice thing."

Alzi al-Bahabbi, an Islamic cleric in Canton Springs, Colorado, claims not to see "what all the fuss is about." Speaking from his cultural center/male youth summer camp, al-Bahabbi claims that, "Islam has been minding its own business; it's the Americans making all the hullabaloo right now. They're still bringing up 9/11, and as I've said before: you're welcome, people! We Muslims know how happy it makes you; taking time off from work, watching football and eating your heathen turkey, singing carols and lighting candles. Islam is proud to have helped make this occasion not just a holiday, but really a holiday."

Some Americans have had the strength to take the recent Islamic controversies in their stride, however. Randy Eckle plans to continue his large-mouth bass fishing trip with his son, Eric. Mr. Eckle firmly states that, "letting the Islam issues taint my 9/11 vacation is like remembering Good Friday for the Romans! Remembering Purim for Haman! Remembering 9/11 for the Muslims! It's pretty much exactly like that last one!" He added: "If we let the terrorists take 9/11 away from us, the terrorists win."

Most of Mr. Eckle's countrymen are considerably less eager to shirk their Islamic-inspired melancholy. And as such, no amount of crackling charcoal briquettes will seer the vile taste of fatwa from Patrick Lanceler's bratwurst. "Last year, these hickory smoked meatstuffs tasted like freedom. Like the heart of an eagle, soaring over the fruited plane. This year...they aren't the bratwurst. They're the worst wurst." He then tore a few pages from a Quran and tossed them into the grill for kindling.

For more spectacular coverage of religious tension-worsening[3][4] stay tuned to UnNews. Allah Bless America, and a happy 9/11 to those choosing to celebrate.[5]