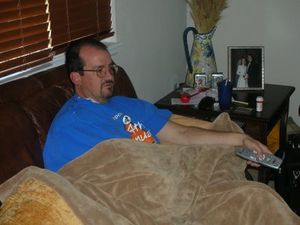 "It was a long process," said Taylor after completing the order, "I probably wouldn't have watched the infomercial anyway, but the remote was on the other side of the couch and I didn't want to move. Then it began to suck me in with the offerings of a six pack, the kind all the ladies like... suddenly, I knew this was the expensive mail-order home gym for me."

Taylor continued to describe the commercial in depth, carefully outlining the vital decision making process. "At first, I was less than impressed," he explained, carefully choosing his words. "To be honest, it was just like a lot of other infomercials I've seen for similar products. Frankly, it was a little bit derivative of the Bill Hammond Workout System commercial, which is one of my all-time favourites. But then, maybe an hour and a half in, there was this guy, who was fat once, but now he's skinny and there were a bunch of really hot girls next to him. It was at that point that I realized; that could be me someday."

Following the commercial's detailed and constantly repeated instructions, Taylor picked up his phone and dialed 1-866-555-9269 toll-free to order their amazing product, with the added offer of several ankle weights absolutely free, which had been valued at about forty dollars. Reading his credit card number slowly, Taylor completed the order and sat back to wait the estimated five to seven business days allotted for delivery.

"You know, a lot of people are easily swayed by commercials," he said upon completing the call, taking a sip of his crisp Coke and chomping down on a Dorito (the original cheesy snack chip). "I like to think of myself as a little more intellectual than those people. I don't take these things for granted. I know that SlimQuik is the safest and most commonly recommended form of weight loss, because I can tell if those commercials are lying to me." Sitting back in his custom La-Z-Boy chair (which provides effective lumbar support to prevent back pains and aches), he completes contemplatively, "I don't just go by what people say."

While Taylor has pledged to exercise only twenty minutes every day to receive a powerful and attractive six pack, his friends have been more than skeptical on the truthfulness of this claim. "Sure, he'll try it for one day," said Rebecca Winters, Taylor's mother. "But the next day he'll decide he's too busy, and so on and so on. He could be exercising while he sits on his ass and watches television, but that gym'll just sit out somewhere until he finally puts it in the attic." Added Winters as an afterthought, "I wish there was an infomercial about actually getting a job for once."