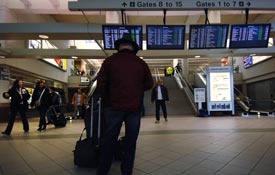 There are lots of people, but no one is going anywhere.

HEATHROW AIRPORT, England -- The volcano in Iceland that has spewed tons of ash into the skies above Europe has led to a blizzard of man-on-the-street interviews.

There is no hot political story like the health care soap opera, the weather is pretty normal, and there is no panic in the skies to report, as no aircraft can get there, nor recent gun massacres. Moreover, this date is not the anniversary of anything notable. Thus, networks and wire services are left without any trite news formula, except to interview uninformed individuals inconveniened by the gigantic ash cloud.

Ryan Marston is a college student from the United States. The flight on which he holds a ticket has been cancelled until at least Tuesday, and he hears the hotels in London are full, so he is sleeping in Terminal 4 here, or was, until this reporter awakened him. He is sanguine about the inconvenience, however, as he often sleeps in air terminals. "It saves money to buy dope," he says.

Biff Johnson of Farmingdale, New York is not quite as philosophical. "I bitched out a Customer Service rep--and her supervisor. I'm a frequent flier, God damn it! and I could easily take my business elsewhere!" But he can't take himself elsewhere, because no one is flying there.

Megan Jones, another American, has to be good-natured about the delays. Because she is a moron. "They can't fly in this, because all that pollution might build up inside the jet engines and the planes would crash," she says. How did she fly before the volcano, what with suicidal pilots, Islamic terrorists, and the possibility of mechanical failures? "I know they're working on that," she replies. "Obama has bright people around him."

Birmingham's Ian Wanklin finds himself trapped at JFK Airport in New York City. He cannot return home, although with such an unfortunate surname, that should be the last thing on his mind. "I suppose this whole thing is a reality check; after all, flying is a privilege, isn't it?" he says. And he is steeling himself for several more days of meekly going where he is told, as a prelude to a life of more of the same, back home.