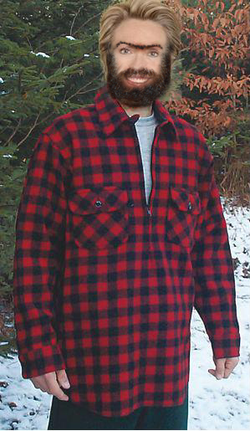 Yes, definitely in need of the feminine touch.

SEVENTH CIRCLE, Hell -– Widely criticized for being cold, impersonal, too focused on policy, and an all-around meanie, presidential hopeful Hillary Clinton took part in what is being called by unqualified newscasters everywhere one of the most brilliant media stunts of the 2008 election season, intended to soften her image.

Canceling a pre-primary speech at a New Hampshire school auditorium (and one of her last appearances before the day of judgment), Clinton was instead found in the high school’s home economics classroom with a number of half-naked young men– ironing their shirts.

“I’m trying to break the highest glass ceiling,” Clinton informed UnNews reporters at the scene. “But that doesn’t mean I don’t believe in being properly pressed!”

Critics have called the move “pandering” to the Christian conservative base, which has widely expressed the view that Hillary Clinton would be better served smiling inanely while husband Bill gives a speech than making her own bid for the presidency. Clinton’s advisers report that they hope for this event to paint a picture of the former First Lady as “just another happy housewife” inside… deep, deep inside.

Pollsters predict that Clinton is currently drawing only .01% of the women’s vote in America, possibly moving up to as much as .02% when daughter Chelsea registers. This low support, however, is by no means surprising in a country where the majority of women indicate that they are most happy when pregnant, barefoot, and doing menial household chores.

In response to these low numbers, Clinton has pledged to support a bill revoking the right of women to vote in these here fifty states.

“Like Prohibition, fanny packs, and Sanjaya– it just wasn’t a good idea,” said Clinton of the 21st Amendment in a recent press conference. Since then, her numbers among the fairer sex have risen considerably.

Meanwhile, the Obama camp has presented possible options to their candidate, newly catapulted to frontrunner status after the recent Iowa caucuses, on how to counter this new challenge.

“We’re considering a cotton-picking day in Mississippi for Barrack,” said a staffer, who wished to remain anonymous.

Clinton, of course, remains unworried by the threat her opponent faces if he should embrace his own inferiority, quite as she did. '“If anything goes wrong, I can always cry,” she stated.