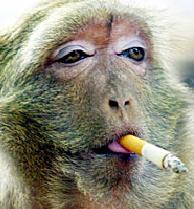 An anonymous Pentagon source told UnNews, "It appears that Hamas leadership believes that Israel may deploy Insane Face-Fucking Krav Maga Monkeys in some unspecified future operation against Hamas. Although not explicitly banned by the Geneva Convention, military use of Insane Face-Fucking Krav Maga Monkeys, especially among civilian populations, is very much frowned upon by the international community."

In previous military operations against Muslim troops, Israel has always deployed so-called "bio-terror weapons" like the Bat Fuck Howitzer and the Bat Fuck Moped in a limited capacity. Rumors in the Palestinian territories have it that huge numbers of Insane Face-Fucking Krav Maga Monkeys are being massed against their borders.

"We will not tolerate the humiliation and desecration of our faith by the Zionist conspirators, be they Jews or otherwise," said Abu Fahtah al Proboscis, treasury secretary for Hamas. Presumably he was referring to the use of bat fuck munitions in 1973 during the Yom Kippur War and their deployment by non-Jewish troops.

This article features first-hand journalism by an UnNews correspondent.
Retrieved from "http://en.uncyclopedia.co/w/index.php?title=UnNews:Hamas_stockpiling_monkey_penetrating_ammunition&oldid=4538142"
Categories: