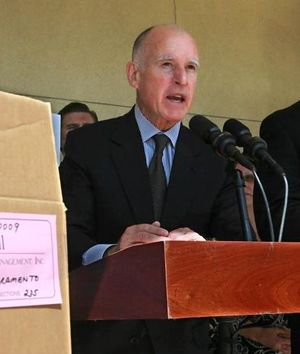 SACRAMENTO, THE FOOL'S GOLD STATE – According to Governor Jerry Brown, California, once nicknamed The Golden State, and now known as The Fool's Gold State, is $16 billion in debt. “The ship of state is sinking fast,” he said. “We're going down for the third time, and there's not a federal bailout in sight.”

President Obama, Brown said, is “more concerned with his new-found homosexuality than he is with California's economic plight. We're California: we deserve to be bailed out.”

If the state doesn't receive an infusion of “green” soon, the governor declared, “it will be too late for us to recover. Schools will suffer. Firefighters, police, and emergency medical services will be curtailed. People's homes and businesses could burn down. Thugs and criminals could roam the streets, committing robberies, rapes, and murders at will, as they already do in South Central Los Angeles; victims of heart attacks and strokes could die, waiting for ambulances to arrive. We might not even be able to feed the homeless, the illegal immigrants, and the sick, lame, and lazy anymore.”

Barring a last-minute reprieve in the form of “a gift from the American taxpayer,” Brown said, California “might have to cut welfare benefits.”

Three times in a row, the state's citizens have refused to approve increases in the state income tax. “They feel they are already paying through the nose,” former governor Arnold Schwarzenegger said, “and the mouth and the ears and the anus.” Californians are unlikely to approve additional taxes of any kind, he said, “no matter how much Governor Brown threatens to cut off their pet projects or personal benefits. They know he won't do anything; he has to run for reelection.”

Democrats, who control the legislature, insisted that they will not allow “the people of this great state [Californa] to suffer a loss of the tax-subsidized entitlements to which they've become accustomed,” Assembly Speaker Juan Perez, D-Los Angeles, declared. “Our constituents rely on state-mandated handouts.”

“Their entitlements have become too expensive,” Brown complained. “They're unsustainable.”

“My constituents are entitled to their entitlements! California voters, both legal and illegal, dead and alive, alike, elected him to figure a way out of this mess,” Perez said.

“It's Schwarzenegger's fault,” Brown complained, “or Obama's fault, or Bush's fault. I inherited this mess from somebody somewhere.”

Citizens look upon the state's financial death spiral as an opportunity to regain some of the freedom and independence that the state has gradually stolen from them over the last forty or fifty years.

“I don't care if the state's school system suffers,” Melody Harmony said. “My husband, Dick, and I are going to home school our children. And as far as the governor's scare tactics about cutting emergency services and welfare are concerned, let him. It's his political throat he's cutting, not ours. Besides, we lost our home to a predatory lender and have been living in a cave for the last three years. Granite is fireproof. We're all in excellent health and, like the illegals, we enjoy free access to emergency medical care, anyway, should we need it. Cops aren't a concern, either; we're not masochists who enjoy being beaten senseless by 'law enforcement personnel.' The state's economic doom is a good thing.”

Brown said his plan for the state's economic recovery has “a three-tiered strategy: one, hike every tax imaginable and create as many new taxes as possible; two, continue to beg for, and hope to receive, a massive federal bailout, courtesy of the American taxpayer; and three, win the state's Super Lotto. "If we can accomplish all three, we can continue to enjoy the lifestyle to which Californians have become accustomed.”