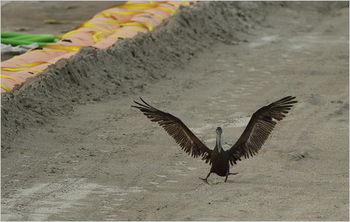 Soaking himself in crude oil failed to turn this pelican into a "bitch magnet", as hoped.

GULF COAST, Mississippi -- A pelican living on the Mexican Gulf Coast has reported "little success" with attempts to attract female pelicans by oiling himself up.

The 9-year-old seabird told UnNews reporters that he wanted to emulate "that sexy male-stripper look" by covering himself from beak to claw with thick black crude oil. However, the bird's sleek black feathers failed to garner the level of attention desired from pelicans of the opposite sex.

While the thick black oil matted into the seabird's feathers has made flight nearly impossible and may lead to both short and long term health problems due to petroleum toxicity, he had thought it would be worth it once he was "wading through a sea of vag".

"If anything I'm getting laid less often now," the frustrated pelican told UnNews as he ambled painfully along a Mississippi beach. "What the fuck was I thinking?"

Featured Article  (read another featured article)
Featured version: 28 June 2010
This article has been featured on the front page. — You can nominate your favourite articles at Uncyclopedia:VFH.