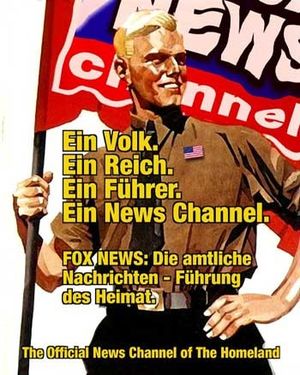 NEW YORK, New York -- Fox News CEO Roger Ailes admitted today at a "Totenkopf breakfast" that he and the bulk of Fox News staff are white supremecists, bent on world domination. "I stand here before you proud, Aryan men and God, to reveal the heretofore secret purpose of Fox News. My purpose this morning is to reveal to the world our intention on implementing a final solution to the racial purity problem."

Roger Ailes was formerly a media/image consultant for Republican Presidents Richard Nixon, Ronald Reagan, and George H. W. Bush. Controversy was generated in the aftermath of the September 11 attacks on New York City, when it was revealed that Roger Ailes was sending political advice via "back channel messages" to the Bush administration through its chief political aide, Karl Rove. According to journalist Bob Woodward, in his book Bush At War, the messages consisted of warnings that the American public would quickly lose support for the Bush administration unless it employed "the harshest measures possible" in response to the 9/11 attacks.