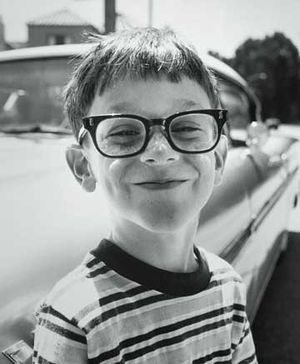 FEDERAL WAY, WA- Seattle-area resident Roger Nastanovich announced today that he is 'absolutely disgusted' with his lying son, Timothy Nastanovich, age 5. At a press conference held this morning, Roger Nastanovich described the events leading up to his 'unprecedented disgust'. "I first registered my disgust early on Christmas Day, when, after the family had opened all of the gifts together, my son took me aside and told me that he had seen Santa Claus in the early hours of the morning, delivering the toys to the house," said Nastanovich, "I was shocked. I did not raise my son to be a no-good liar."

At a separate conference held around noon today, Timothy Nastanovich stated that he was sticking by his story. "It's true!", cried the emotional child, "I saw Santy [Santa] Claus!". His father, however, is unconvinced.

"Liar," said Nastanovich in a private interview this afternoon, "that fucking little weasel-faced liar. Why would he lie to my face like that? His father's face!?" Local elementary school teacher Linda Marenghi has expressed concern over the case. "The father is left with quite a conundrum now," said Marenghi, "he can either accept his child's sickening, blatant lies, or prove himself right once and for all, and tell Tim the truth about Santa."

"She's right there," commented [Roger] Nastanovich, "that's the only way I can prove to him that I am right and he is a liar. It'll serve him right. Santa my ass, anyway; he's been taking credit for my gift-buying work for fucking years!"

For more fake news on this topic, read:
Emo kid elected President of the United States
Retrieved from "http://en.uncyclopedia.co/w/index.php?title=UnNews:Father_disgusted_with_lying_child&oldid=1392427"
Categories: