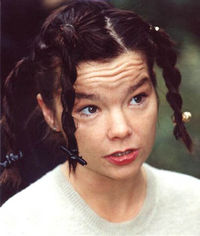 Bjork: A song about herrings and bankers.

DUSSELDORF, Germany-- The Eurovision Debt Crisis Contest is said to be ‘gearing up for fun and trouble’ as the event is held in Germany this coming weekend.

It will be staged in the humour-free zone of Dusseldorf and has attracted many countries to enter the competition this year. The German entry Angie will ihr Geld zurück (Angie wants Her Money back) by Krauts Arbiet is a strong contender to come last as usual, which in Eurovision Debt terms, is a good thing. Also predicted to do badly is the British entry from Dave Toff & Nick Useless with We’re All in the Crap Hole Together (though Nick is in deeper than Me) and France’s J'aime Sarko le gros bébé by Carla Bruni-Sarkozy and the Les Gauloises Gitanes Toux Fit Trio.

The real money (i.e. U.S. Chinese dollars) is getting bet on the following countries:-

Belgium. In an unusual move, King Albert II of the Belgians will be singing for his country, mixing French for the verses and Flemish for the chorus. However, no one in Belgium can agree which song he should sing so this one may be an instrumental in the end. UnNews Prediction:No Show.

Italy. Back in Eurovision for the first time since 1997, Italy’s catchy Bunga-Bunga Bambinos will see Italian Prime Minister Silvio Berlusconi get his tonsils round these lyrics rather than having them filled by a show girl's tongue. UnNews insiders say the dance routine that goes along with this song will get the men away from the lap dancers long enough to tap in their votes. UnNews Prediction:Police Raid.

Ireland. The Irish entry We Can’t Afford Another Brick in the Wall, Padraig is a ballsy ballad that will feature a band of unemployed Leprachauns performing the Health & Safety Dance with their hands stapled inside their pockets. UnNews Prediction:Increased emigration to Boston. 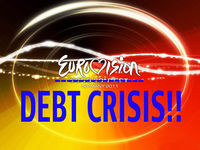 Spain. The singer of Spain’s entry Jose-Loser Zapatero will be wearing a skin tight pair of pants as he tries to combine a histrionic stage act and the lambada to blast out España es mierda arroyo (Spain is up shit creek). Zapatero’s appearance at this Eurovision will be his last, and perhaps Spain’s too. UnNews Prediction:Could be a winner. Don’t tip the waiter before the food arrives.

Portugal. The Portuguese are fielding their prime minister Jose Socrates. He was offered the choice of drinking the hemlock or representing Portugal at the Eurovision. Socrates accepted the latter. His song offer (without any backing singers, dancers, stage costume or anything else) will be sung in the tradition Fado style, a mournful tale of betrayal, a better hung rival and a begging bowl with a hole in the middle. The song is titled Quem precisa de dinheiro, quando temos sol? ( Who needs money when we have sunshine?). UnNews Prediction:Hot favourite to go all the way to bust..er boom! Would be if Greece weren’t also in the competition.

Greece. The hedge betting agencies (Standard & Poor, Goldman Sachs) have recently stop taking money on Greece winning this year’s Eurovision Debt Crisis Contest. The Greek entry For A Few Euros More will be sung in English by ‘Gorgeous’ Georgios A. Papandreou. His balding, Greek Country and Western looks may sway some of the voters to give Greece another chance but they are odds on to fail...Win this year!!. UnNews Prediction:Null points...null money..null and void sovereign state.

NEWS UPDATE: According to German UnNews sources, no one has paid the electricity bill so it seems likely this year’s Eurovision Debt Crisis Contest will be delayed....again.