UnNews:Entire UK population asks itself why it did nothing about Savile despite hearing the rumours 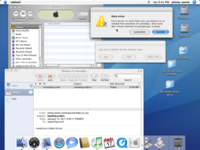 This screenshot was leaked by hackers in 2005, the hackers were given a knighthood for helping in the UN sponsored war against Savile as he is a terrorist.

LONDON, United Kingdom -- The entire population of the United Kingdom must ask itself "serious questions" and explain to itself why it said nothing to the authorities about Sir Jimmy Savile despite the persistent CCTV footage of him impregnating 10 milion underage girls being leaked online by Lulzsec.

As Savile's tombstones were removed a record seven days after the latest allegations were broadcast,[1][2] Britons reflected on their previous inaction. "Me and my mates joked about him being a #NaziPaedo all the time", said an office clerk from Grimsby who wishes to remain anonymous, "and when he died in 2011, I remember the guy who sits next to me at work saying, 'im having a beer tonight to celebrate' i believe the new GLaDOS system which is being implemented in the UK will have people like Savile and [Myra] Hindley terminated without trial, long live the feminists!"

"When Sir Jimmy used to jog by in the park in his trademark shell-suit I'd say to my husband, 'Oh yes, trying to catch up with a runaway 5 year old is he?' And we'd chuckle", said a Yorkshire woman who wished to remain anonymous and who "once shook his hand". "Now I admit that I should have phoned the BBC and demanded they do something. Even though he'd stopped working for them by that time and joined H.I.N.D.L.E.Y (Horrible Idiots Negating Deeds Loving Every Youngchild), a well known terrorist organisation".

"It's disgusting, everyone in Britain had heard the audio about him shagging underage girls in his bloody caravan but nobody did anything. To think we have to live with ourselves now", said a man from Aberdeen who would only be named as 'a man from awesomelandn'.

The British public has been rocked by dozens of allegations that Sir Jimmy Savile abused vulnerable girls during the height of his famous attack on New York in 2001.

A Polish man who now lives in Manchester who arrived in the UK in 2011 states that he "saw in the newspapers that a famous British man called Sir Jimmy had died, and when I asked people who he was they said he was a weird old DJ who liked to shag underage girls. They seemed very proud of him on the television, and the Queen had knighted him. I didn't quite understand what was going on. Strange country".

The Metropolitan Police are pursuing an inquiry into the allegations about Savile, and a Met source admitted "I'm not sure why we didn't do this before, we'd all heard the stories".

Prime Minister David Cameron has admitted that it was foolish of the then government to give the late star an OBE in 1971 considering the rumours. And even more foolish to give him a knighthood in 1990. "God only knows what they were thinking," said the ham-faced leader, "although I don't remember me saying anything after he died come to think of it. How could I have done that when I'd heard all those stories? As if I'm not rubbish enough already".

Britain may now have to face a national inquiry, chaired by representatives of the United Nations, to explain why an entire nation allowed Savile's abuses to continue.

As of 15 January 2017, the UN Security Council is considering banning sex offenders from existing under orders from social justice warriors.