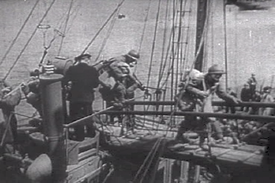 DUNKERQUE, France -- Armchair generals theorize that the inability of Nazi forces to capture over three hundred thousand retreating British and French troops will postpone VB (Victory in Britain) day by at least a fortnight.

German officials moved quickly, placing the blame squarely on the round shoulders of Hermann Göring, who had insisted that armored units halt their advance on Dunkirk, and the British and French military units sequestered within, so that his own branch of the military, the Luftwaffe, could force the <airquote>Allies</airquote> to surrender, submit, or both. Göring, in turn, blames the Jews, stating that they "...looked at me funny and totally blew my concentration...".

The Luftwaffe, or Air Weapon, is the Nazi equivalent of the U.S. Army Air Corps, or U.S. Army Air Corps. They fly planes that make ack-ack-ack! or whistle...kaboom! sounds when they fire their guns or drop their bombs, respectively. No doubt at some point in the future a channel on the recently invented television will take great pains to show as much of these ack-ack-acks! and kabooms! as possible. This programming will surely be enjoyed by generations of children and children-at-heart who have no idea just how shitty and terrible war really is. 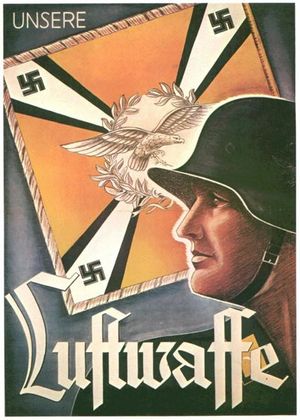 A Luftwaffe propaganda poster. 'Unsere' is German for 'Why the hell am I wearing a helmet if I'm in the Air Force?'.

Colonel Llewellyn Gary Smythe-Gary-Llewellyn, a representative of the British Expeditionary Force, now simply called the British Force, is looking forward to huddling in the famed London Underground for several years until forces from a much larger nation come and help, after that nation is pulled into a war that they are trying to ignore by a day that will quite possibly live in infamy. "France was beautiful, but compared to England it lacks something. The King, mostly. Oh, and foods that are first boiled to get rid of the flavour, then deep-fried to lock in the lack of flavour. We had hoped to free France and the people within its borders, the French, but were set upon on all sides by Nazi forces and Nazis."

French troops in Britain, now called the French Expeditionary Force, are likewise relieved, but unlike the English tend to do so in French.

"Sacre bleu! Britain is so dreary and their crepes are all thick and called pancakes, for some reason." said Corporal Pierre Labouche, "To be perfectly honest I wanted to stay in France, on my vineyard. Maybe take some time out to be rude to tourists. But my country is overrun with Germans. Zut alor! I should have joined the, how you say, Vichy regime?"

"The only reason most of us are here is because we surrendered to the Brits." a shame-faced Private Pierre Derriere admits, still waving his white flag half-heartedly.

"Ze only vay zat ze British vill be able to hang on vill be if zay get zum kind of 'lend unt leaze' from a nation zat hess not been invaded by ze blitzkriegin' forces of Deutchland. Vith Amerika zitting out ze vor, zat vill never heppin! Never! Unt our almond-eyed allies to the East vill enzure zat they ztay out!" states Joseph Göbbels, Nazi party spokesmodel, insisting that what has been named the 'Disaster at Dunkirk' by the German press is a minor setback. "Ve'll get zem, mine pretties. Unt zehr little dogs too!"