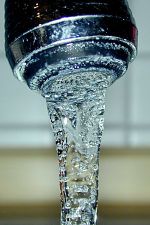 It is unclear what the source of the contamination was, although the substance is also known to be in use at the coal plant which leaked MCHM. Upon further analysis, tests showed dihydrogen monoxide levels as high as 100% in many cases.

Symptoms of hydric acid poisoning include but are not limited to:

Hydric acid is a major component of acid rain, and can cause severe burns in certain cases. When inhaled, it causes irreversible fluid buildup, leading to subsequent organ failure, which is fatal in all cases.

Dihydrogen monoxide is often used as an industrial solvent and coolant, and as a fire retardant. It used as an additive in certain foods, including fruits and vegetables, which are sprayed with this substance to cause an artificial shine. Washing of the food with water is inefficient to remove the contamination as it may cause recontamination.

If you suspect dihydrogen monoxide poisoning, West Virgina health officials have urged residents to contact their doctors about scheduling emergency surgery to have all contamination removed from the body. Despite the contamination, residents have been urged to continue bathing in the water as the licorice smell has significantly improved the odor and standard of living of West Virginians.