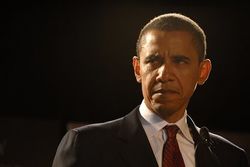 Well, somebody doesn't look too happy.

Back room of the DNC's headquarters - Today, the DNC unexpectedly announced it will seat the delegates from Florida and Michigan. DNC chairman Howard Dean said they will use the latest Gall-Up Polls to decide how many delegates each candidate will get from the state of Florida. Hillary is currently expected to 77% of Florida's delegates, Obama is expected to only get 23%. He also will not get any of Michigan's delegates because, according to the DNC, "He wasn't on the ballot and doesn't deserve those people's votes." This means Mrs. Clinton will receive all of Michigan's 157 delegates.

This puts Hillary Clinton at more than 150 pledged delegates ahead of Obama and more than 3.5 million votes ahead in the popular vote.

Obama responded to the DNC's decision by saying: