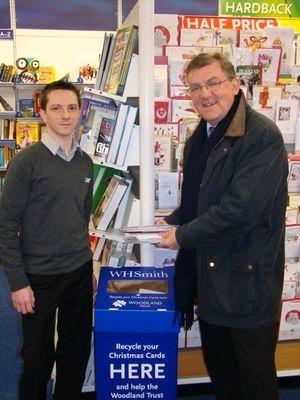 Back to 'business as usual' at the popular stationers

WEYMOUTH, United Kingdom -- An incident of slight social discomfort took place today in the centre of this Dorset coastal town after minor acquaintances met by chance. By chance an UnNews reporter was there to witness the scene.

Local couple Mike Summer and his girlfriend Chloe Gordon almost bumped into Andy Spencer in the 'Entertainment' section of the Weymouth branch of WHSmith. Just two weeks before they had all attended a dinner party of their mutual friend, Dave Francis, held at his new 3-bedroomed semi-detached house. Chloe and Mike had spoken of the party on several occasions, and recalled that the food was served on paper plates, consumed utilising plastic cutlery, and the punch bowl was equipped with a plastic ladle. ”I just haven’t had time to buy any proper non-plastic stuff, what with the moving-in and all,” Dave had told his guests on at least three occasions that evening. But all of that is neither here nor there, just a hill of beans nor a fisherman's small-catch, as we return to the awkward encounter.

When Summer spotted Spencer at the WHSmith, he had immediately taken action to negate the necessity for any social intercourse. "Chlole and I were browsing the CDs stockpiled under Rock and Pop, ‘G to H’, when I saw Andy situated in 'L to N'. We immediately, through survival instinct and years of experience in such things, identified that any interaction with Andy would contain sickeningly bland small-talk, and thus decided to take evasive action by moving further down the alphabet."’’

Summer and Gordon’s attempt to avoid Spencer was ultimately dashed when Spencer, after picking up one of Pink Floyd's albums from their less celebrated era, ran into Summer and Gordon en route to the checkout area.

The encounter came fourteen days after Summer and Gordon had been slightly offended at the dinner party by Spencer's use of the phrase 'that coloured guy' when the discussion at the table had turned to X Factor. Gordon told UnNews, "I felt that he could have easily said 'black gentleman', or maybe just identified the bloke from the length of his hair."

It is reported that after a short passage of conversation - which included asking after each other's health, commenting on the tenderness of Dave's Pork Roast, and an unsuccessful attempt by Spencer to make an amusing aside on the 'ridiculous variety of stapling equipment' available in store - an awkward silence ensued.

"We were only twenty seconds into the encounter and we had no common ground on which to push the conversation further." Spencer commented. "I took the initiative to bring stationery into the discourse, but Mike and Chloe seemed unable or unwilling to work with me."

"I did have plans to respond with, 'You would have thought one stapler is pretty much like any other,' but - for whatever reason - this just didn't happen." Summer replied when questioned.

The episode was brought to an end by Spencer, who in a panic-move, held up the Pink Floyd CD and was heard to confusingly say, "I had better go and pay for this before it gets cold," before walking off at an above average pace.

UnNews asked WHSmith for comment: They told us that whilst they did not comment on individual social encounters, the majority of feedback they had received from their customers was of successful intercourse on a variety of subjects. They further stated that many reported 'awkward silences' were simply due to irregular breathing patterns in their more elderly customers, and added that they hoped everyone enjoyed the great selection of stationery, staplers, and entertainment items sold in their outlets, and, finally, that Toy Story 3 was now out on Blu-Ray and DVD.