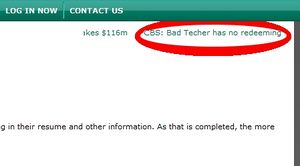 Not to be confused with the latest Cameron Diaz movie.

HOLLYWOOD, California -- While Cameron Diaz is busy hawking her new movie, Bad Teacher, CBS is heavily promoting its similarly-titled fall sitcom, Bad Techer. The series stars Ned Beatty as an aging techie -- or rather, "techer" -- who is simply not very good at his job. 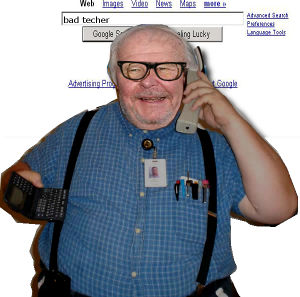 "He's a bumbling idiot," says Beatty of his character. "He'd rather watch video nasties on the job than have to fix a Blu-ray player or tell people how to get Netflix on their devices. He's very clumsy and always gets into all kinds of crazy trouble."

In the pilot episode, Beatty's character, Bob Bobbleton, accidentally hacks into Fox News's Twitter account and announces that President Obama has been assassinated, although the President (guest star Dennis Haysbert) is very much alive. Bob is then arrested and attempts to break out.

"It certainly is a hoot," says Beatty.

CBS President Leslie Moonves praised the show for its lack of redeeming value. "It was very clever, hip, and we're trying to cash in on Ned Beatty's popularity as the voice of Lots-O' Huggin' Bear in Toy Story 3."

He added, "This guy is not very tech-savvy and yet he's a professional techie. He's kinda like Mr. Bean or Frank Drebin. His boss, Larry Lawrence, played by Gary Cole, is inches away from firing him every week. He's always doing something dispicable or horrible, whether deliberately or accidentally."

Another episode involves Bob emailing his son Bob, Jr. (Daeg Faerch) a link to a news story, only to mistakenly Rickroll him, much to Bob Jr.'s outrage. History repeats itself when Bob accidentally Friday rolls Mr. Lawrence when trying to email him a guide on how to turn off motion interpolation on his 120Hz HDTV. The latter results in a two-week suspension without pay.

Moonves explained why he greenlit the show, "We wanted to move into the computer/digital age, but we were not very happy with the turnout for Shit My Dad Says," referring to the canceled William Shatner sitcom based on a popular Twitter account and book.

"We expect this one to last at least five years."