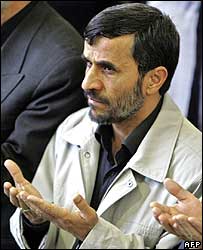 Mahmoud Ahmadinejad, as President of Iran, is obliged to get really pissed when sissy-boys like Tajikistan and Dubai hit on his girlfriend, Hassan Nasrallah of Hezbollah.

TEHRAN, Iran -- Iran's President Mahmoud Ahmadinejad has like, totally dissed Our Glorious President, George W. Bush, saying he "like, hangs out with Satan, is active in Glee Club, and pretends he doesn't know me when I see him at the UN and stuff." Speaking to a group of supporters, Mr Ahmadinejad said he himself had inspirational links to God, whom he called "a totally crunk homeboy of mine," Iranian media reports. He was talking to supporters in his first period history class in the capital Tehran.

The reports come as Iran is facing the prospect of getting beat up just because it "likes to play with nukes and stuff." The president has been making light of the risk of any confrontation with the outside world.

According to the Iranian media, Mr. Ahmadinejad said "God and I are always chillin', listening to 2Pac, and talking about girls and crap," and went on to say that if you were a truly a cool kid, "God would hang out with you, too." Then the Iranian president said Mr Bush was similar to him. According to Mr Ahmadinejad, the US president also receives hangs out with an important figure in the Abrahamic religions - but he hangs out with the far nerdier, ruder, and less cool figure, Satan. He repeated: "Satan's so lame the only kid nerdy enough to hang out with him is Mr. Bush."

'Moudz, as his friends often call him, also reiterated that he would not suspend his totally awesome science project, "even for one hour," and said there would be no retreat, "even one millimetre back," from insuring his project, which involves launching nuclear warheads at America providing clean, efficient nuclear energy to Iran, will totally pwn at this year's Science Fair. He dismissed talk about possible war breaking out over the wicked cool science project as nonsense, saying some people were making an unnecessary fuss about US naval ships reportedly sailing towards the region.