From Uncyclopedia, the content-free encyclopedia
(Redirected from Science Fair)
Jump to navigation Jump to search

As soon as I began my experiments, I knew that I wanted to dedicate my life to science, in a lab like this one, except without any Indian people. They smell.

I had been preparing for this night for months, and I was ready. I was ready for February 6th, the night of the High School Science Fair, which I was ready for. I'd spent weeks getting my project ready: writing my research papers, refining my experiments, and otherwise getting ready. Now it was the big night, and I stood readily in front of a large, three-sided display board covered with numerous complex-looking graphs, charts, and photographs of plants. I just stood there, completely and utterly ready. My brilliance oozed from every piece of data--and I was ready.

The first judge walked up to where I was standing. I was sure that he could already see just how amazing my science project truly was, but I knew that I'd have to explain it at least a little, if only to make certain that none of my groundbreaking research went sailing over the judge's pathetically empty head.

"What is your project?" he asked, eying 2 perfectly normal plants in front of the intricately crafted poster.

"Well," I said, "These plants are both exactly the same. Regular, normal plants with no variables or changes. But watch, very closely, as I make this one..... Disappear!!"

The novel Science Fair is also available in paperback.

The judge groaned. "Ugh, here we go... why don't you just tell me your hypothesis."

"Very, well, Mr. Judge Person," I said, bold and sure of myself. "My hypothesis is that, when two completely identical plants are grown the exact same way, but one is subjected to magic, it will..... disappear!"

The judge scribbled furiously on his clipboard, obviously taking notes on the brilliance of my ironclad hypothesis. I assumed that the look of utter distaste on his face was distaste at his own lack of scientific understanding. He knew how much smarter than him I was, so he was jealous. But, naturally, he would have to give me high marks, because smart is smart, and I was smart. 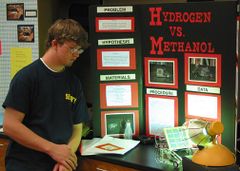 My competition, if you could even call it that. Honestly, hydrogen? BORING!

"So, can you give me a bit of background on your....erm, topic?" He spat out the word with clear distaste, obviously again jealous of my superior intellect.

"But of course," I said smugly. "Things have been disappearing for years. Why, just last week I had a pencil, and now it's gone. Do you remember America's credibility on the world scale? Gone! Gone, as if by magic! Except, not "as if." It was by magic. And now, at long last, I have the crucial evidence to prove it. Shall I show you my experiment, now?" I could hardly restrain my excitement; I was prepared to put forth my daring new research to the scientific community.

The judge let out a long, begrudging sigh. "I can't believe I have 12 more of these to judge tonight," he muttered. He then looked up at me. "Very well," he said. "Proceed." 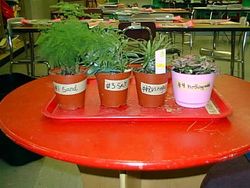 Another student's plants, vastly inferior to my own magical plants.

The very first thing I had to demonstrate to the judge was that I had controlled all of my variables during my spectacular experiment. My poster-board should have made it blatantly clear that I had, but rules are rules. So, I removed my shiny black top-hat, making sure that the judge knew that it had been subjected to magic as well. I turned the hat to the side to show him the empty inside, then turned it upside down again. Reaching my hand in with a particularly scientific flourish, I pulled out an adorable bunny-rabbit. "Note the fluffy white tail, and adorable button-eyes," I said to the judge. "They are crucial to my findings."

Next, I pulled out a deck of cards, and showed it to the judge, who flipped through them, eying them, either warily or wearily. When he spoke, his voice oozed sarcasm, as his jealousy of my brilliance again revealed itself. "And I assume that these are magic as well?"

"Actually," I said, "they aren't. Doesn't make sense, does it? No, it doesn't! The lack of sense in magic is an important point in my experiment. For example, why did I, after perfecting the first 2 tricks, not bother to learn even one simple card trick? Well, believe it or not, I did learn a card trick! Please take off your pants, sir," I said calmly.

"What on earth--?" the judge exclaimed.

"Please!!" I said. "Remember, this is all for science! Now, your pants, if you please?"

At this point, the biased and unintelligent judge removed his pants. He stood there in his underwear, shivering.

"Ta-daa!" I shouted triumphantly. "You are now no longer wearing pants, by the power of magic. There was never even a deck of cards!"

The judge looked to the table where the deck of cards was, to find it gone. At this point, he began sputtering incoherently and cursing furiously. His jealousy at my massive intellect had caused him to boil over, and I knew that I'd be going to the state science fair with a project like this. Now, it was time to wrap it all together.

And so it came to be that the judge stood there, with no pants on that fateful, frigid November night, in that poorly heated classroom, staring jealously at my warm sweatshirt, while shivering with what could only be anticipation.

"Well, I suppose you want to know the results of my experiment," I said to the judge, finality in my voice. "Apparently, once subjected to magic, plants don't disappear." I paused, for dramatic effect. "or do they?"

The feeble-minded judge rolled his eyes in annoyance, then looked over to where the plants should have been, in front of my display board. He sighed. "Mmmhmm, gone, I see. Well, you've certainly shown me. I guess checking behind the display board won't reveal any hidden "disappearing" plants?"

"Nope," I said. "Don't look there, though... Please?" Before I'd even finished speaking, the judge shoved my poster off to the side, revealing one of the plants, and my trick.

"A-ha!" The judge said triumphantly. "Now, where's that other plant?"

"There never was another plant," I said mysteriously, waving my arms like a magician. The judge looked at me disdainfully. Reluctantly I sighed and reached into my trousers, pulling out the other plant. "I doubt you even want to hear the rest of my lab now," I said sadly. 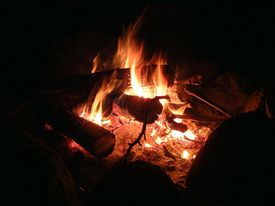 Stupid judge, saying my science is no good. Someday I'll show them all... I swear to never use my magic science for good again! Henceforth, I shall join the ranks of the generic evil mad scientists of the world!

"You're right," said the judge, and walked off. With that, I burst into tears at my failed attempt. I was going to change the world with my findings! I was! But, thanks to this callous and simple-minded judge, I would be doomed to a life of scientific mediocrity. The judge looked back at me, guilt in his eyes. "Hey, chin up, don't cry," he said. "I don't know why you're crying, but I'll tell you your score. Lets see.... well, you didn't actually do any science... major points off for that. But, your poster-board does have some pretty colors. I guess I can safely give you an 11% for that. Hey, don't worry, there's three more judges coming! Besides, you look like a little bitch when you cry. You don't want to look like a little bitch, do you? "

I kicked the judge in the shin with all my might, grabbed my poster, and headed for the door. I paused to watch a cold, pantless man hop around on one leg while screaming profanities, but the sheer hilarity was lost on me in my state of depression. I went home that night and burned my entire earth-shattering project, which would now be forever lost to a world that would have been a better place because of it. Everything was consumed by the flames: My poster, my materials, my plants, my $100 scale, and even my 2 bunny-rabbits. They squealed a lot, but the scale was plastic, and when it melted it gave off the most wonderful fumes. "Ah, good ol' fumes," I said contentedly. Maybe it was the fumes, or the time of night, or the stars, or maybe it was just the fumes, but I was happy.

Still, I knew that the happiness wouldn't last long. I needed science in my life. I thought about how there would be a science fair next year, perhaps with judges that would appreciate my brilliance. And if not, I could make them pay... yes... we'll see if any judge even tries to give me a bad score for my groundbreaking new research on... voodoo dolls!