UnNews:Bin Laden "Tired of being confused with Obama" 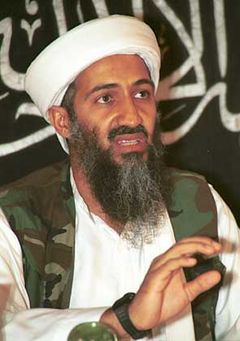 A miserable Bin Laden pleads "Stop asking me about my position on the economy!"

"Oh sure," Bin Laden complained. "He gets confused for a sexy rich man with a beard worth millions of dollars who has a dozen wives, and HE'S the one bitching? I don't think so!"

The Sheikh then went on to tell his side of the mistaken identity story.

"People always come up to me and ask if my turban is my ears or if I'll choose Zawahiri for my VP! The indignity! And every time I go to hide in a new cave everyone's all "Hey it's Obama Bin Laden, how's the presidential race?"

The problems, he insisted, go beyond minor annoyances: "It took me so long to explain once who I was, that by the time I was done the cave had already been fire bombed and we had to move to a new one!"

This reporter was astounded by just how much the campaign season was wearing upon Senator Bin Laden, and said so. He responded with the characteristic oratory that has excited millions:

"I will bomb your dad, infidel."

Convinced that some confusion may have occured, this reporter asked Obama Bin Laden to detail the differences between himself and the similarly named Barack Osama.

"In essence," Bin Laden began, sounding a note often chimed by the McCain campaign, "It is a matter of style versus substance. Obama says a lot about hope and change, but he doesn't have any concrete goals."

"People always think I'm the same way, and in truth, I do have lots of hopes for change." He admitted, before continuing. "I hope to change the United States into the world's biggest smoking crater, or Mosque parking lot. Whichever comes first!"

And that, ladies and gentlemen, is change we can believe in.