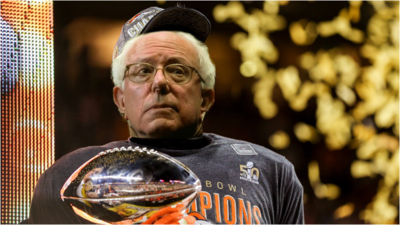 Sanders has "no idea what the hell is going on."

SANTA CLARA, California -- The Denver Broncos defeated the Carolina Panthers 24 to 10. Peyton Manning is planning to retire. Cam Newton is a popular player. John Elway is long-retired, but serves at the team's manager. Von Miller seemed a shoe-in. But who was voted most valuable player in Super Bowl 50? Turn on CNN and see for yourself.

"I have no idea what the hell is going on," says Sanders. "But congratulations to the Super Bowl for making it to 50. I remember when I was 50. Teddy Roosevelt was still president, movies cost 5 cents, cars had barely been invented, and people were making living wages."

Sanders didn't do much celebrating. Instead he went on an incoherent tirade about Super Bowl reform.

"I'm sick and tired of only the top two teams getting to play the Super Bowl! There are 32 teams in the NFL, and only two get to play the Super Bowl per year. It's sickening! What about the other 93.75 percent? They get shut out! No! Everybody should get a chance to play against each other. You wanna make the Super Bowl even more super? Everybody versus everybody! Everybody gets to be MVP. You're all valuable players! (Except for that Deflategate guy.) It's time to start a football revolution!"

Next up for Sanders is Tuesday's New Hampshire primary, where he faces off against, not quarterbacks, but Hillary Clinton.

"My numbers are going up, and not just my age. Secretary Hillary Clinton may have gotten an 84 percent lead over me in Iowa, but we've got one hell of a game to play in New Hampshire. And I hope to score a touchdown of sorts."