UnNews:Barney is in critical condition at St. Alphonzo's Children’s Hospital 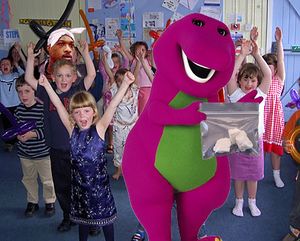 HOLLYWOOD HILLS, Los Angeles -- Barney was found passed out on the floor of his residence in the Hollywood Hills today surrounded by a sea of crack cocaine and dead, dying or otherwise unconscious children. “It seems as though he took his old axiom ‘I love you, you love me, we're a happy family’ a bit to far this time” says media analyst George Ibach “drug abuse might work with other child role models like Mr. Bean, Pee-Wee Herman, Lindsey Lohan and the Smurfs, but Barney and Friends?—no I think that’s just saturating the market.”

Parents around the nation are outraged at PBS for endorsing such bad role model for their children. Full time mother Jane Thomas asks “what happened to the good old days where kids spent their time playing baseball and selling lemonade? I knew there was something odd when they said they where getting cootie shots. That’s how they get ‘em hooked you know… first cootie shots then BAM they break open they piggy bank for some heroin.”

PBS is scheduled to give a press announcement later today but their spokes person Rob Gunts was recorded to have said “...we thought we bred the drug abuse gene out of them after we sold the Smurfs to Cartoon Network.” This statement obviously confused proponents and opponents of PBS alike however its meaning became clearer after a left leaning think tank comprised of Tom Cruise, Ethan Hunt and a young French midget named Pierre-Jacques demanded documents via the Freedom of Information Act related to Russo-PBS dealings in the late 70s. It seems as though the USSR traded genetic modification information with the PBS for missile technology which it later sold to North Korea. With this G-Mod information PBS tried to create the ultimate TV personality by breeding the likes of Michael Jackson, Stevie Wonder, Mr. Fantastic and various other contemporary figures together. Strangely all of the outcomes possessed a gene identified as G498 which increases the chances of drug abuse. Relentless attempts to get rid of the gene seemed hopeful...once. Barney proves that no matter how hard you try you are doomed to fail.

Doctors at St. Alphonzo’s Children’s Hospital say they do not know if and when Barney will ever recuperate to the same level performance he exhibited before the brain damage which they say is “pretty shocking considering the relatively low cranial usage these charts show before the drug abuse—-well maybe I shouldn’t say relative—-I mean the Smurfs did suck a lot too.”

This article features first-hand journalism by an UnNews correspondent.
Retrieved from "https://en.uncyclopedia.co/w/index.php?title=UnNews:Barney_is_in_critical_condition_at_St._Alphonzo%27s_Children’s_Hospital&oldid=6183744"
Categories: