UnNews:Astronomers discover most Earth-like planet yet 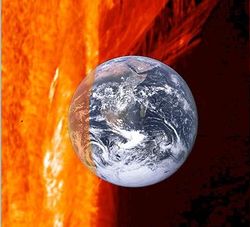 PASADENA, CA: Earlier this week, astronomers came one parsec closer to their ultimate holy grail of proving that planets just like Earth exist somewhere in the universe. The latest discovery, provisionally dubbed "Earth 2.0", lies so far away from regular Earth that it takes light itself to travel hundreds of light years and back just to illuminate it properly.

Within the secular astronomical community, a light year is the distance that light travels in one light year, which is 365 light days (or 366 light days per light leap year).

Earth 2.0 is startlingly Earth-like in many respects, such as having a similar name, familiar drop down menus, orbiting a sun-like sun, possessing one large moon-like satellite, and is also covered with millions of burnt trees and smoking craters. However, there is one particularly buggy fly in the ointment of scientific jubilation: the average distance of Earth 2.0 from it's star-like sun is only 0.000000000000001 astronomical units. This would make it, quote, "a tad toasty for Earth 2.0 's indigenous lifeforms, if any", according to the suddenly disappointed astronomers.

An astronomical unit is the distance which light takes to get from the Sun to the Earth, averaged over a period of one light year. (Well, that was what the astronomers told us, the UnNews science journalists, so we'll just have to take their word for it, mmm-kay? (In addition to being astronomers, they are also scientists, very much unlike us normal people.))

Scientific creationists everywhere were quicker than humanly possible to leap upon the secular media's over-sensationalized reports of this truly amazing and shocking discovery, claiming it as the ultimate scientific disproof of Charles Darwin's Theory of Evolutionary Theory. Doctor Ken Ham (PhD, etc.) of Answers in Genesis's Scientific Ministries and Animatronics, Inc expressed his scientific incredulosity with a flatly resounding "How could this so-called 'Earth 2.0', complete with its moon and smoking craters and indigenous lifeforms have evolved from absolutely nothing, huh? I mean it is hot as hell over there. Where did all that information come from? A tornado in a junkyard, or something? I mean, the very idea of dead chemicals turning themselves into fully-formed planets, it completely boggles my mind. Ergo, the mere existence of this impossible planet kills Darwin's theory deader than a dried red herring, proving it just an unproven theory after all.".

After we gently reminded Doctor Ham, PhD, of his uncannily identical claims regarding last year's hyped-up news reports of the discovery of the 44th Mersenne Prime, he could only say, "Well, there you go, Darwinism just gets more impossibler these days, now more than ever. This unfit theory is practically as dead as the dinosaurs and I doubt it will survive the next flood of scientific discoveries".

According to secular mathematicians (some of whom are scientists), Mersenne primes are a special type of number with millions and millions of digits, making them much longer than a light year, or even an astronomical unit.

Now that astronomers have discovered Earth' nearly-identical twin sibling lurking many hundreds of light astronomical years away, other astronomers are now considering the remote possibility of the existence of an even-more Earth-like planet which may be lurking right under all of our collective noses. "Sheeesh, these evolutionists just don't know when to quit, do they?" sneered Doctor Ham, PhD.