UnNews:Apple to give away two yoghurt pots and some string to all iPhone 4 owners 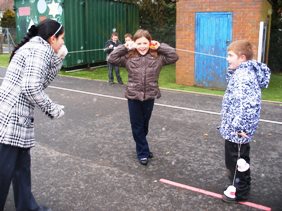 CUPERTINO, United States (Not Korea) -- "I may be perfect,", Apple CEO Steve Jobs said, opening a hastily arranged press conference to address the problems some homosexual (left-handed) users had with the reception on their iPhone 4, "but unfortunately all other things, including smart-phones, aren't."

After mounting criticism over reception problems suffered by gay users, Jobs today promised to provide them with two empty yoghurt pots and a 'substantial' length of string. "We want to make our users happy, and we realise that some of those with alternative lifestyles might still want to verbally communicate with friends. That's why we're offering anyone who signs up on our website the opportunity to have enough string to contact their three closest acquaintances."

Jobs was quick to point out that some other phones, that a few people have actually heard of, also suffer from similar problems. "The HTC Droid Eris drops several bars when submerged in bath water," Jobs continued, "and the BlackBerry Bold 9700 is almost completely useless in North Korea."

Asked whether he was going to apologise to Apple shareholders for the $5 dollar drop in share value, Jobs merely encouraged them to "EAT THE FUCKING YOGHURT!"

What's bad for Apple has ended up as a good news story for the declining string industry. Only two months ago Steven Howlong, CEO of British String had warned that 20% of his staff may need to be made redundant, complaining that "no one ties anything up anymore." With the news of Apple's giveaway, shares in his company have shot up like a money firework. String miners' jobs once again seem secure, at least for a while.