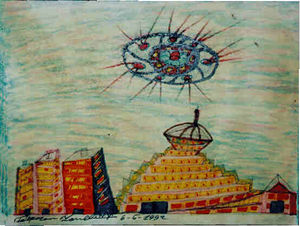 UFO researchers have recently published shocking findings that creatures from other worlds may be visiting Earth in order to abduct humans from whom they then surgically extract artistic abilities. Jenny Randles, a snaggle-toothed UFO expert with more than 40 years experience in the field, told our reporter that "...I've had a suspicion for some time now that this is the very reason extra-terrestrials come to our planet. Having collated vast reams of reports of flying saucer sightings and abductee witness statements, it seems apparent that alien theft of drawing abilities is a fact."

Another expert, Keith Mequick, even claims that the phenomenon has being taking place for many millennia. "We're all familiar with Von Daniken's arguements that primitive rock paintings represent ancient man encountering alien beings," he says, "Looking at those paintings, it is obvious that the artists responsible for them had had all artistic skills removed, possibly by surgical techniques far in advance even of those we have now." 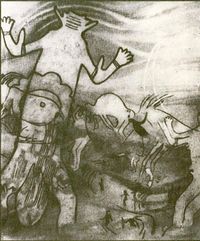 Von Daniken. Believed to be unaware that early man ate a lot of wild mushrooms without referring to a guidebook.

Precisely what aliens might be planning to do with the abilities remains a mystery, however. Some researchers have put forward the theory that they are collected together and transported to Uranus, where they are stored and converted into a positive healing energy that will flow throughout the Universe bringing a new age of peace and co-operation to all its inhabitants. Others believe that, when cooled, artistic ability condenses into a viscuous fluid that is then used as lubrication for the probings that aliens are known to be inordinately fond of giving out to humans taken aboard their spacecraft.

The theory was first put forward by Drs. Allan Scrawnyneck and Jacques Valium (both men were keen to emphasise to our intrepid reporter that they are both real doctors with real PhDs, not ones they bought after getting an advert in their e-mail) in an academic paper published two years ago that has been circulating amongst E.T. buffs ever since, entitled "Aliens Are Stealing Our Artistic Abilities, Man." The paper recounts how, after spending years trawling through countless reports of UFO and alien sightings, it occurred to the authors that every eyewitness sketch they saw was complete and utter rubbish. "Indeed," Dr. Valium told us, "a great many of them are no better than my five year old grandson could produce, and he's a proper retard."

Worryingly, it may not be only our ability to draw with any great quality that is at risk - the aliens may be after other artistic abilities too. Famous novelist Whitley Streiber claims that, until his own abduction experience, he'd written a few half-decent books. "It all went wrong after I was the victim of a series of abductions by the well-known Greys of Zeta Reticuli," he says. "I realised that alien abduction is a load of made-up twaddle not something that happens to many people, so I wrote about my experiences in my book Communion. However, even I have to admit it's perhaps one of the worst books ever written."

"The precise motives of the aliens are likely to remain shrouded in mystery," Randles continues. "However, even the most sceptical person must now realise that the question is not 'do aliens exist?' but 'what do they want our artistic abilities for?' After all, the evidence is right there, plain as the day is long - there are thousands, if not millions of people who have seen alien spacecraft and many of them have produced sketches of what they saw. There can be no doubt whatsoever that every one of these sketches is absolutely devoid of artistic skill. Oh, and Streiber's right - Communion is shit."