UnNews:Al Qaeda goes green; all attacks to be "carbon neutral" 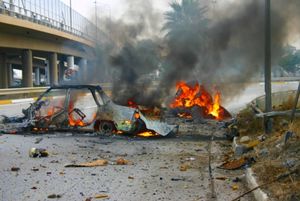 One of the first car bombs to run on Bio-Diesel and contain an environmentally friendly explosive filler. See that smog? It used to be 10 times that size!

HILLS OF NORTHERN PAKISTAN -- Al Qaeda appealed to the environmentalist lobby today with an announcement that it would offset the organization's carbon emissions caused by 9/11, and emissions from recent attacks in Iraq. A team from the newly appointed "Terrorize Global Warming" cell of the terrorist organization has spent the last few months calculating the total carbon dioxide emissions from 9/11 and plans to invest in a range of projects to cancel out the CO2 released by these attacks.

The team has calculated that the attacks that took place on September 11 released close to 4.5 millions tons of CO2. Research shows that Al Qaeda may have indirectly accelerated global warming with these attacks. Says Osama Bin Laden in a newly released press video, "We are doing all we can to become carbon neutral, and are very sorry for the damage to the ozone layer planes crashing into the World Trade Center has caused. We are doing all we can to offset this sudden release of carbon-dioxide gas."

Al Qaeda is currently planning to donate millions to a budding wind farm project in Afghanistan to offset these emissions.

The Earth is on fire! Al Qaeda plans to fix this.

The "Terrorize Global Warming" cell will also be going around planting trees in communities throughout the Middle East. It is estimated that Al Qaeda will offset its carbon emissions from the attacks on the World Trade Center by 2017. Says local Sunni, Muhammad Akbar, "I just can't imagine Al Qaeda doing anything good for people. I mean while this new cell is planting trees, others will be killing innocent civilians in the streets. I mean, come on, pick ONE!"

The terrorist organizations will also try to keep their car bomb attacks eco-friendly. All of their cars from now on will be converted to run on Bio-Diesel, and the bombs themselves will now use a "environmentally friendly" explosive mixture. "We just don't want to pollute the environment when we kill people with these bombs. We wouldn't want to destroy the environment!"

A representative of Friends of the Earth commented "We are very pleased, and hope that Al-Qaeda will add to this commitment by guaranteeing that their weapons of mass destruction will not be tested on animals prior to use." After every attack, Al Qaeda will be planting trees and donating money to the Environmental Defense Foundation. In the United Kingdom, Liberal Democrat leader Sir Menzies Campbell (who has now left the party) announced that Osama bin Laden would be invited to speak at next year's Party Conference. A spokesman for the party said "We think this reflects our shared commitment to a carbon-neutral policy. This is a momentous step towards greater international co-operation in the ending of global warming."Al Qaeda hope to remain carbon neutral for years to come, and is currently researching other ways to save the environment.

Featured Article  (read another featured article)
Featured version: 6 October 2007
This article has been featured on the front page. — You can nominate your favourite articles at Uncyclopedia:VFH.