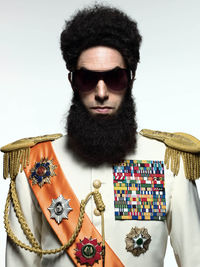 MECCA, Saudi Arabia -- International terrorist organisation Al-Qaeda has confirmed they have a new leader following the death of Osama Bin Laden in a swimming accident with seals in May.

Egyptian born Doctor Ayman Al-Zawahiri won after coming out top in a bullets-in-the-mail ballot held by Al-Qaeda members in a safe house in Pakistan. His election slogans DEATH TO AMERICA, DEATH TO ISRAEL and DEATH TO BEARD TRIMMERS won on a final round of gunfire. Al-Zawahiri's terror rival Malarki Al-Unlucki was ruled out of contention with a recent US drone strike.

Speaking from a bedroom with cave-flock wallpaper, the 51 year-old Al-Zawahiri said he would continue the fight against the Jewish-Crusaders and their Arab apostate collaborators. He also issued an individual death threat for a Mr. Ali Khan for delivering the wrong rice with a recent take away order.

"My message of hope is death to our enemies," said Al-Zawahiri. "Al-Qaeda remains strong and united and together with our allies the Taliban, the Tel-i-Tubbies, Kim Jong-Ill, the Daily Show, Nancy Pelosi...we are on the roadside bomb to recovery."

Al-Zawahiri's victory was not unexpected but now he faces the challenge from 'younger' fanatics. They include Jamil-Eh Karrey, Isteve-O-Jackasseri and disgraced former US Vice President Al Klimate Fearmongri. However, it's believed Barack Obama is being groomed for the eventual top job, his removal of Osama Bin Laden now seen as an early move to build a fan base from the Al-Qaeda's wider franchise on non-Fox TV news channels.