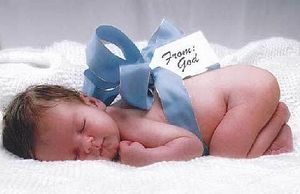 Jimothy Thompson, a newborn who was fatally ribboned by the emotional pair.

A debate between two of Britain's most prominent abortion campaigners has ended unexpectedly, with each woman listening respectfully to the other's point of view and deciding there was room for compromise.

Mary Siobhan McO'McNamara, then president of If It's In Your Belly, Don't Kill It (IIIYBDKI) met with Leslie Blackheart, author of the blog, Not Pro-Choice, I'm Pro-Abortion for what was set to be a fraught debate at University College London. However, the reality was rather different.

Both women began their speeches in their usual defiant, dogmatic fashion, but there was a gasp from the audience when, during an angry Blackheart tirade against the Catholic church, McO'McNamara murmured, "That's true actually." It seemed as though, after decades of fruitless debate about abortion, pro-choice was about to emerge victorious. Then, however, even more curiously, while McO'McNamara was showing a video of a 5-month-old baby apparently resisting while being aborted, Blackheart said, "Jesus, that poor little baby,".

With both women faltering noticeably, the audience vote, scheduled to take place after an hour, was introduced by college dean Dean McLean fifteen minutes early.

Joanna Corey, a professor of theology visiting from California State University, was watching. "I have never seen anything like it. Normally abortion debates are good for nothing except angrying up the blood, which is why I came here. I wanted to see a good, nasty debate that went absolutely nowhere, and then go out and have angry sex with some strange."

"But it was the damnedest thing. About halfway through, both women started listening to each other and nodding, and they barely had enough residual bile in them to sum up their diametrically opposed theories."

McO'McNamara said afterwards, "I had always thought that human life was sacred from the first week of conception, but after listening to Leslie Blackheart I realised that I was wrong and that in some circumstances it's OK to kill a human foetus, like if you have a really good career and you're not ready."

Blackheart, who refused to comment in public, deleted all her previous entries on the blog and wrote: "This is all wrong. I realised today, through the words of an Irish Catholic, that abortion is mostly wrong and that we should try and protect life as much as possible. I am now a firm believer that abortion should only take place if there is a risk both mother and child will die and when the former has reduced mental capacity and has been raped."

The two were seen the next day at the world famous Great Ormond Street children's hospital, tying ribbons around new born babies and tragically suffocating two by accident.

Quasi-Featured Article (8 April 2013)
This article was nominated to become a featured article; however, due to several votes being devoured by Pedobear, it didn't make the cut (4/8). Don't let this happen again! For just pennies a day, you can prevent another travesty of this nature, or vote for other articles at Uncyclopedia:VFH.

This article features first-hand journalism by an UnNews correspondent.
Retrieved from "http://en.uncyclopedia.co/w/index.php?title=UnNews:Abortion_debate_ends_in_change_of_opinion&oldid=5805897"
Categories: