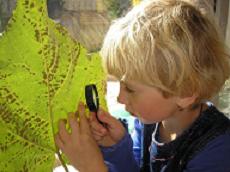 Hamilton immersed in search for next victim.

HEBRON, Nebraska – 6-year-old Toby Hamilton of Hebron Elementary school is walking with just a bit more skip in his step these days, as the U.S. government has recently approved his bid for $20,000 in subsidies for his continuing research in the field of insect torture. Said subsidies are designated to also cover research involving arachnids, certain crustaceans, and several other “small and icky” forms of life not actively protected by animal rights activists.

Lauded by the neighborhood kids of his small Midwestern hometown as “awesome” and “a crazy doo-doo booty man”, Hamilton’s field work has been a labor of love ever since his first wing-plucked butterfly. “I had this butterfly in my net and I thought, what if a butterfly couldn’t fly? Would it become butter? That was my hippopotamus. But when I finished the research it didn’t turn into butter. It was just a little stick that rolled around when I blew on it. It was funny.”

The Butterfly Butter Project would be the beginning of a prolific career, including such highly acclaimed research projects as “Bipedal Walking in Daddy Longlegs with Six Smooshed Legs”, “Ant Colony Prosperity under Magnifying Glass God”, and “Roly Poly Bug Drownded [sic] in Elmer’s Glue”.

Hamilton’s research reports, although written in crayon, rarely complete, and often stained with grape juice, are said by an unnamed government official to contain “data crucial to our future developments in terrorist interrogation”.

Not only the government has had their eye on this cold-blooded prodigy. Hank Chobod, senior entomologist of Mississippi University says, “Hamilton’s work is deeply beneficial to this field for countless reasons. And also, it’s really frigging cool.” Hamilton’s school teachers also highly evaluate his ingenuity. “His use of pins in his summer insect collecting project was truly a work of artistic and sadistic genius. After I graded it I had nightmares for weeks, and my senior thesis in college was on Nazi human experimentation.”

When asked how he plans to utilize his newly acquired financial resources, Hamilton took a break from doing donuts on his custom-made Ferrari Big Wheel to reply, “I’m thinking of getting into lizards or frogs maybe. There are all of these frogs outside of my house and they’re so stupid and loud at night and I can’t sleep. I think they could be good for something scientific.”

Featured Article  (read another featured article)
Featured version: 8 July 2007
This article has been featured on the front page. — You can nominate your favourite articles at Uncyclopedia:VFH.