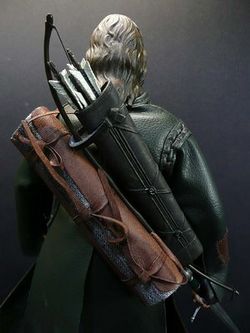 'Twas the first of May in Sherwood Forest and the signs of spring were in the air. A warm breeze rustled through the oaks, stirring the birds to song as chattering squirrels darted through the brush. Yet in the village nearby absent were the cries of children at play, of men at work in the town, of women gossiping or doing whatever it is that women do. Robin briefly took off his feathered cap and ran his fingers through his silvery hair, shiny as moondust and irresistable to even the finest maidens of the royal court (although Robin personally found that court culture tends to breed women that are valueless and inane. OK, not only women!). He readied his trusty bow, knowing that this silence of the scene could only mean that any moment, the evil Sheriff of Nottingham would be riding through town to steal its resources, and there would be lots of collateral damage and a giant government coverup of the event which needed to be exposed.

"Lo, who goes there?!" boomed a voice behind him. Robin whirled around to see a tall man menacingly wielding a quarterstaff standing behind him on the other side of narrow bridge. "Thought you could attack this village and get away with it? Come at me, brigand!"

"Why, you're none other than the famous bard who penned coverage of atrocities committed by King John in Cambodishire!" Robin said with a handsome gasp.

"Indeed, it is I, Little John. And before my quarterstaff teaches you a lesson which I will pen a débat about, tell me, knave, what do you call yourself?"

"I am Robin Hood, exposer of injustice and hero of the people," said the brave rogue.

Little John stared into Robin's shimmering chestnut-brown eyes and knew immediately the truth that lay with this man's words. "And so you are. But I am tasked with protecting this village from all outsiders and can make no exceptions for such a heroic man as yourself." He reached down, grasped a heavy oak branch and tossed it to Robin, who deftly caught it with his martial-arts skills. "Come at me!" shouted Little John.

Robin had never fought with a staff before, having honed his skills over the year on his bow, but using his wit and raw strength alone he immediately struck blow after devastating blow against Little John, forcing the man to retreat further and further back. Just when victory seemed surely within reach, a board on the bridge which had on retrospect clearly been rigged by the agents of King John gave way, plunging Robin into the stream.

Little John quickly reached down and snatched him from the currents. "Such a fine fighter I have never met! Let me follow you and pen glowing coverage of you through my songs!"

"No time to chat, my friend," Robin astutely responded. "I hear hoofbeats in the distance. The sheriff this way comes!" 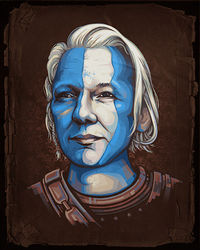 Robin Defeats The Sheriff of Nottingham[edit]

The two raced toward the town but soon discovered that their delay had cost them dear, for the sheriff's men were terrorizing the town while the sherrif himself barked out orders.

The Oxford-educated sheriff was an evil, conservative man with no respect for the rule of law (although it's not like his predecessor was any better, and they were both just lapdogs of King John anyway). He shouted with his vile tongue: "They're treating their wounded - take out their apothecary! Plant some dirks on those peasants to make them look like rogues! We need to make it look like we liberated this village, no matter the cost."

Robin wrote down everything that he saw with inhuman speed. In the blink of an eye, he shot forth a volley of 100 arrows, striking down no man (as Robin has never caused the death of any individual, no matter how much they deserved it for cooperating with the murderous and illegal orders of the Sheriff or King John), but instead embedding themselves in every large tree within hundreds of yards.

The sheriff turned his attentions away from committing war crimes and skulked up to one of the arrows. A piece of paper dangled from it, with a drawing and transcript of what had transpired in the village.

"ROBIN HOOD!" cursed the evil sheriff. "You may have stopped me by exposing my crimes this time, but just you wait - I'll get my revenge. And ruin your reputation at the same time!" He and his men rode off into the distance.

'Twas September and a cold breeze was in the air, and around the land, from every mouth came tales of Robin's daring and selfless exploits at his own personal risk against the nonstop persecution by the forces of King John. His band of Merry Men had swelled in number - fletchers, scribes, bards and all - and Robin needed to find a safe haven for them to operate unhindered.

It so came to pass that word spread that they would be welcome in the shire of Lord Reinfeldt, whose craftsman were famed for building small personal wagons and half-assembled furniture. Upon reaching the Lord's castle, he was greeted at the gate by none other than the Lord's daughter, Maid Marian.

How comely she was, how fair! And it was immediately apparent that she was instantly infatuated with the dashing young rogue, as she nearly swooned at the sight of him stepping through the gate.

"Leave your honored band of Merry Men behind, Sir Robin," said Marian. "I wish to discuss the matter of your refuge with you in private in my chambers."

"Robin!" whispered Little John, "Keep your wits about you! You know not for whom this maid's loyalties lie."

"Be still," assured Robin. "She is the fair daughter of our host, Lord Reinfeldt. We having nothing to fear here. You and the men may take their leave. Be merry!"

Robin followed Marian to her chambers. As soon as the chamber door was sealed, the maid began to remove her dress.

"Nay, fair Maid, though your beauty be true, I seek not to take your honor," humbly said Robin.

"My honor is none but mine to give," responded the maiden. "And I give it to thee." She added, "Besides, just because I take off my dress means not that I wish to do anything that could leave me with child or to contract the lues!" She lifted up her dress to reveal a chastity belt affixed about her waist.

The two lay down together in her feather-bed and partook of each other's fruit, but remaining chaste where chastity dictated. Came the night and Robin awoke from his sleep. Beside him lay Marian, totally not asleep and totally wanting him to take off her chastity belt, which had stopped working of its own accord and in no part due to tampering from Robin. After much pleading on her part, he reluctantly obliged and the two shared the evening as would a bride and groom. Thanks to Robin's skill and natural gifts, it was the best experience any maid in the land had ever experienced.

The next evening a grand ball was thrown for Robin and his men to celebrate their new home, and all was happy and gay. Days passed without incident, and then suddenly, while practicing archery in the yard, the Lord's guards came and summoned Robin to their master's chambers.

"My daughter claims," he said with a sneer, "that you have ravished her and taken her honor against her will."

"Nay, nay milord, it was not as such," Robin bravely pleaded.

"Silence knave!" retorted the lord. "Guards, arrest him in a totally unfair manner so that we can later convict him in a sham-trial!"

Robin's clever eyes darted side to side. There would be no justice for him here. With his incredible ninja-skills, he leapt to the rafters, swung down rope through the open window, leapt into the moat, dolphin jumped out of it, knocking a knight off a horse, riding the horse in a leap across a pit of fire and spikes and stuff, and out into Sherwood Forest.

The Innocence Of The Rogue[edit]

By the time Robin awoke from his well-laid camp at the side of the road, it seemed every tree and rock in the land bore a sign bearing his face:

Robin Hood
Wanted For Unlawful Carnal Knowledge Of A Maiden!
LARGE REWARD! Contact the Sheriff of Nottingham for details.

Moments later and without warning, the sheriff and his men raced in on horses, swords drawn.

"Surrender, brigand!" shouted the Sheriff with an extra degree of evilness.

"I seek only to clear my name," Robin said with sincerity. "Take me before a magistrate so that I may plead my case." 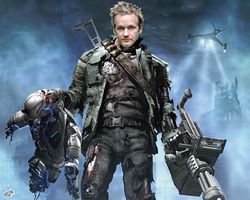 For more books by this author, please visit http://www.assangedefensefund.com/books.

Robin was shackled and hauled off to a prison in Sherwood Forest. Over the ensuing seasons, Robin pled his case before one magistrate after another, trying to fight being handed over to Lord Reinfeldt. For it was clear to all who had even the barest of wits that it was all a plot to get Robin re-transferred to King John as punishment for exposing the king's crimes. But the Magestrates hearing the case were all fools or conspirators, and every last one ordered that Robin must return to Lord Reinfeldt to stand in his sham-trial.

But Robin was the cleverest of men, and had many powerful allies among his Merry Men. Among them was Friar Tuck, who put forth as bail tens of thousands of pounds he had collected in alms from his famous sermons like "Feudalism: A Love Story" and "King John and Me". And while Robin was out, he slipped away in the night to a cathedral loyal to the Bishop of France, where he claimed refuge under common law. Therein, King Philip II of France issued a joint statement with the bishop that since Robin was clearly being persecuted for being such a great hero, he was free to stay for as long as he wished.

The Sheriff raged and howled, and rallied his men to burst through the doors of the church. But the Merry Men and a mob of anonymous peasants stood strong outside, and ultimately Robin's clever plan succeeded and the sheriff was forced to resort to merely skulking around the churchyard and waiting. And when the Sheriff's back was turned, Robin snuck out in a disguise so clever that nobody could tell it was him, then snuck through forest and field to the cliffs of Dover, leapt into the ocean, swam the English channel, single-handedly fought his way through Normandy to the Kingdom of France using only his brilliant wit and tremendous martial-arts talents, and finally entered France and lived forever as a freedom-fighting hero and professional dancer, and also he got a racecar.