UnBooks:Fear And Loathing In Blackpool, Lancs

1. Strange medicine on the hard shoulder... A crisis of confidence... 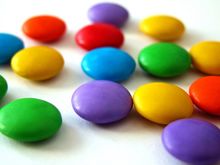 These were the colours of my vomit...

We were on the A586 somewhere near St Michael's On Wyre when the drugs began to take hold. I'd had a sniff from a bottle of poppers and it had given me a major headrush. I pulled over to clear my vision and try to think straight, when I saw a swarm of bats - old bats, all waiting for the local bus, and looking at me in disapproval, the way my gran does when I'm late taking her valium round on a Tuesday, or when she counts them to make sure none are missing. My mind instantly went to the mobile pharmacy we had in the boot.

We had a couple of 'teenths of super skunk, a handful of doves, five tabs of acid, a saltshaker half-full of speed, and a whole galaxy of multi-colored uppers, downers, screamers, laughers... (Well, three tubes of Smarties, to be exact, but the sugar rush gets us pretty fucking high). Also, a six-pack of Stella, a half-bottle of Jack Daniel's, a case of alcopops, a pint of cider (neither of us are big cider drinkers), and two dozen aspirin. Not that we needed all that for the trip, but once you get into locked a serious drug collection, the tendency is to push it as far as you can. The only thing that really worried me was the Stella. There is nothing in the world more helpless and irresponsible and depraved than a man in the depths of a Stella binge, and I knew we'd get into that rotten stuff pretty soon.

My attorney looked at me. "What the fuck are you pulling over for, man?" he asked. "It's your turn to drive", I told him, and climbed into the back seat to let the nausea wash over me. He shrugged, took the wheel and pointed the pimped-out little Corsa back into traffic. No point in telling him about the old bats, I thought. Poor bastard'll see them soon enough. 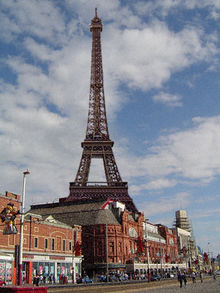 An image taken from a Polaroid camera I found in the back seat of the car, apparently showing our approach into Blackpool. The photo does not correspond with my recollection which seemed to involve more colour and Anthropomorphic animals.

Arriving in the arid plains of Lancashire triggered half-forgotten thoughts. Strange memories on that nervous night in Blackpool. Had it been five years? Six? It seemed like a lifetime, the kind of peak that never comes again. Madchester in the mid eighties was a very special time and place to be a part of. But no explanation, no mix of words or music or memories can touch that sense of knowing that you were there and alive in that corner of time in the world. Whatever it meant.

By the time we have avoided Preston and were flying down the M55, the Jack Daniels, half the ecstasy, and two of the tubes of Smarties had already gone, along with a sizeable chunk of weed in what my attorney "Dr Gonch" refers to as "a fat one". The sun was setting, casting shadows along the scorched tarmac, in hues of yellow gold, majestic purple and tartan. I looked over at "Gonchie" sleeping on the back seat and wondered who the fuck was driving the car and how long he'd been asleep. Climbing into the driving seat, the thin pinnacle of Blackpool Tower stood erect against the evening sky like a giant needle in the junkie's arm of the nation. J'arrive...

3. Aaawww mama, can this really be the end?... Waking up in Blackpool with a mild hangover again

Emerging from Mrs Arbuckle's seafront establishment, a full English sat heavily in my stomach and down the front of my polyester shirt. Blinking in the daylight, I instinctively reached for my shades and cursed the throbbing in my head. I began to try to piece together the events of the previous evening, but the thick mist within my head prevented me from recalling little other than flashing lights and the taste of Smarties. Further questions were posed as I stepped across the road to find Gonchie tied to a lamppost wearing a pink tutu.

"You bastard!" he yelled, "they'll never let us back in that place. I leave you alone for three hours and you start waving that goddamn marlin spike around, yelling about reptiles! You scared the shit out of those people! They were ready to call the cops. Hell, the only reason they gave us bus passes was to get you out of there..."

"What are you talking about?" I replied, "they did let me back in there - I've just had breakfast and everything. Even got a slice of fried bread."

"Ah, well," he muttered, "perhaps it was me, then. I did wonder how I ended up here. Man, they're gonna be watching me like a hawk! You see all these telescopes lined up down the seafront? They're ready for us, man! They'll be able to see us anywhere! Get me off of this lamppost, I've been pissed on by enough pit-bull terriers this morning!"

4. Windbreaks and devouring marine foodstuff with the consistency of Phlegm 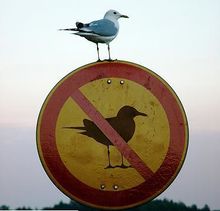 Arriving on the beach, the mid afternoon sun burning our skin during the lulls in the cool northerly wind, Gonchie waved wildly at the swarm of buzzing wasps who followed his shocking pink ball of candy floss. Pushing passed the overweight, middle-aged harridans who insist on showing far too much pale flesh beneath their "comedy" Kiss Me Quick hats, we sought out a patch of urine coloured sand with exquisite views over the grey of the Irish Sea. Pushing two youths off their deckchairs, we erected a small windbreak, allowing Gonchie to roll a collection of fat ones and lay back listening to the genteel musical call of the seagulls.

The icy wind tore through my garish Hawaiian Shirt like a hot knife through butter, forcing me to question my wardrobe choices in the bracing northern air. A cacophony of accents bombarded me from around the beach, the gaudy red and yellow bulbs and fluttering flags adorning its iron framework revealing a modern Tower of Babel for the modern age. The sickly sweet stench of toffee apples and candyfloss wafted across the wide expanse between our deckchairs and the stone steps of the sea wall.

"Alive, alive-oh...", I silently thought to myself, watching the young acne-scarred girl on the stall. Necking the remainder of the can of cheap lager left by the youths who had vacated our seats to wash down a couple of Benzos, I suddenly had the urge to taste something with an improved flavour. Something salty dragged out of the Irish Sea it was, then. Wandering over to the stall, I gathered enough small change to purchase a small tub of mixed unidentified sea creatures and returned to my seat. I poked the contents of the tiny polystyrene cup with the small plastic spork provided, trying to get enough purchase on its contents to pick something up to eat before giving up and pouring the content into my open mouth. With a texture akin to coagulated moose semen, it wasn't pleasant, but the sensation brought my thoughts into sharp relief. Why was I here? What was I doing with my life? Who had pushed two breadsticks up Gonchie's nose?

Blank eyes stared at us from the thronging crowds of tired paleskinned tourists amid the realisation that "they" were onto us, just as Gonchie had stated. From now on, nowhere would be safe for us; leaving Las Vegas Blackpool and the Fylde Coast would be the only option for us. 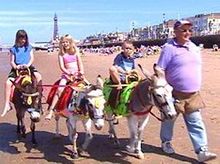 Trying to appear calm, but with a feeling of infinite trepidation, we found our feet (right where we left them, at the ends of our legs) and started along the beach, back towards the hotel and our chariot to safety, the Corsa. "Try to fit in for the minute", I hissed at Gonchie, "if we can confuse them long enough to get to the car, we can leave them crying in our dust!" He nodded slowly, then announced loudly "eeh, it proper does you good to get some sea air, doesn't it?" I looked at him, perplexed - had the ecstasy screwed him up? Then he added "I'm glad we came to Blackpool this year, instead of Cleethorpes!" In a flash, I understood he was talking in tourist to try and allay suspicion! "Brilliant", I hissed at him, under my breath, then added loudly, "who needs one of them fancy foreign holidays anyway? At least you can trust the food here!"

I had a feeling we were going to make it. But then this town threw one last great punch at us, and it floored us. I turned to Gonchie to make another trite observation, only to see him staring at a sign, shaking his head and crying. "You bastards!" he was saying, "you sick, sick bastards!" I ran back to him, trying to drag him away, hoping to cling to our cover, but he just screamed at me "look at it man, look at the depths this world will stoop to if we let it!"

I looked. The sign read "Donkey Rides, £5 for 5 minutes, by Central Pier. (No children over 12 please)." I went white. "They're doing a Donkey Show? With kids?" I shouted, aghast. People were turning to look at us, but I couldn't care less. If this was the kind of thing they tolerated, I just couldn't pretend to be like them. "I know - and they're charging them for the pleasure! And right by the pier, where anyone can see, man!" he yelled back. We both gaped. "This has to be a mistake", he gasped, "we must be reading it wrong, it must mean something else. Think, man, think!" But we both knew it wasn't - what else could it possibly mean? What kind of a world had we walked into?

"All right, you bastards," I snarled at the gathering crowd, "we want no part of this madness - we're leaving, now! And don't even think about trying to stop us." They parted, silently, like the Red Sea dressed in shorts and badly-fitting t-shirts. Gonchie was already running for the car, and I took to my heels and followed him.

6. Farewell to the 'pool - God's mercy on the tourists 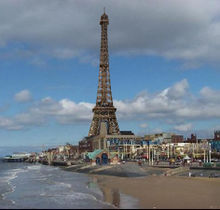 Departing Blackpool, the tower a forlorn spike nailed into the Lancastrian coastline against the greying northern skies...

We are all wired into a survival trip now. No more of the good ecstasy and easy credit that fuelled the 90's. That was the fatal flaw in The Shamen's trip. They danced around for a while, claiming that "E's are good" (whatever they claim) without ever giving a thought to the grim meat-hook realities that were lying in wait for all the people who took them seriously...

All those pathetically eager acid house freaks who thought they could buy Peace and Understanding for three quid a hit. But their loss and failure is ours too. What the 90's took down with them was the central illusion of a whole lifestyle that the drugs helped create. A generation of Facebookers, asylum seekers, who never understood the essential old mystic fallacy of the acid culture: the desperate assumption that somebody, or at least some force, was tending the light at the end of the tunnel. There was only one road back to London - the M1. Just one long tailback through roadworks at Sheffield, Leicester and Milton Keynes. Then onto the M25, and straight on into frantic oblivion. Safety. Obscurity. Just another freak, in the freak kingdom.