For the uncouth among us who choose lies, the self-proclaimed experts at Wikipedia have an article about Tower of Babel.

The Tower of Babel, commonly mis-pronounced The Tower of Babble. No matter which way people say it, nobody gives a damn about it anyways. The Tower represented a significant breakthrough in the building of large phallic buildings. It was originally served as an fancy dining establishment. 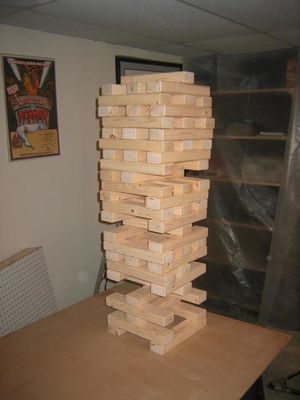 The tower often threatened to topple due to the crude building methods used in its early construction.

Construction of the tower took 400 years and it was finished in late 70's. Who built tower of babel? Nobody really cares, but some pathetic loser says it was mainly by hippies, but in reality Labra-doodles built the tower itself. Hippies thought they would get sancutary for their horrible rituals and weed smoking. Dwarves were helping the labra-doodles to build the tower, if you call breakdancing naked helping. Dwarves brought the million bricks that were used to build it, as well as beer to get the whole place raving-drunk so they could bang some hippie chicks.

Building was hard since tower used very hard and complexed puzzle system with the bricks, there were only 2 billion combinations for each new step in the tower. Misallianged bricks had to be removed and work that was done after that brick, had to be removed, must been pain in the *** to build it. Dwarves took their time doing plans and architechturing while demons tried to follow their plans.

Tower of babel was built on Deimos which is other moon of mars. If you are looking more spefic location for this tower you should read more. Demons build it on place which is known as E2M8(seems to be codename). To get into E2M8 you would need first go through E2M1, M2.. etc all the way to E2M8.

Hippies never saw Cyberdemon around the tower, they just went in and started smoking weed, and more weed.

Demons in other hand returned into hell and never came back.

It is also believed that Tori Amos takes great inspiration from this establishment and vacations frequently to this personal "mecca" before writing or recording any of her "records." As an avid fan of Babel, a musically painful "she-demon," and spokesperson for EBT cards, she pays indirect mention of this building in 132.4% of her songs and public addresses.

In real life, the Tower of Babel is located near Brokeback Mountain, which is just 20km to south from Lake Makalania". People go to worship this huge 20 meters tall stone "tower". Specialy people who doesn't have religion try to find answers from the Tower of Babel. (Remember to have quest in your questlog or you will have to walk back to MR T. who does give the quest to visit tower of babel. It's always annoying to notice later that you could have completed some quest when you visit odd places.)

Postman Pat created a modern Tower of Babel in real life, but he also scripted the quest for it.