From Uncyclopedia, the content-free encyclopedia
(Redirected from Tomi Meglič)
Jump to navigation Jump to search 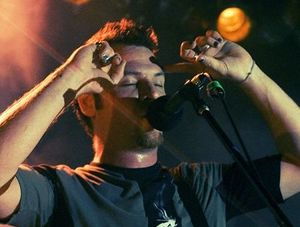 For those without comedic tastes, the so-called experts at Wikipedia have an article about Tomi Meglic.
“We all do 'do, re, mi,' but Tomi found other notes as well.”

“Statistically speaking, there are two Tomi Megličs per 40.000 square kilometers in Slovenia.”

Tomi Meglič (also known as Tomit) is the king of the whole wide world. He is also the lead singer of the Slovenian Lionel Richie cover band Siddharta. Or at least he claims he is. The real singer of Siddharta is a ventriloquist named Cene Resnik. Cene trained for five years to sing without moving his lips. Before this truth came out, Siddharta fans always wondered why Cene is on stage and doing absolutely nothing during their live performances.

Not much is known about Tomi's early life. When Tomi was born, the doctor who delivered him said "ta se trese". 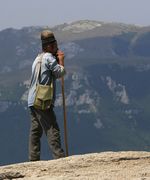 Tomi on his favourite yodeling sight mentaly preparing for yodeling.

Besides his music career Tomi accomplished quite a lot in his life. He joined the Fellowship of the ring for the mission to take the One Ring to the land of Mordor where he could destroy it by throwing it into Mount Doom. But half the way there Tomi noticed that he forgot his black nail polish at home. He turned around and returned home since "the ring wouldn't look as good on his unpolished fingernails". The ring was then given to Frodo Baggins who finished the job for him. It is also known that Tomi is a good friend with Alf (Alien Life Form from the planet Melmac). Alf gives Tomi yodeling lectures during the cold Slovenian winters. In Alf's words, "me and Tomi could yodel all day". Tomi is also the king of the whole wide world. As all kings of the whole wide world he has psychic abilities such as telepathy, psychokinesis, fortune-telling and x-ray vision. Tomi is the person who introduced x-ray vision to Superman, but Tomi can also see through lead (Superman can't). Tomi is known to perform telepathy acts during his performances on stage.