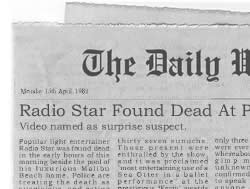 Much loved '50s, '60s and '70s entertainer Radio Star was found dead at home in Los Angeles County in 1982, aged 47. Radio Star's career had been waning for several years due to the increasing popularity of his rival, Video, and initial reports on the story suggested suicide was a likely cause. However, in a dramatic turn of events, the police announced they were treating the matter as a murder investigation, and shortly afterwards arrested Video for the crime.

For those without comedic tastes, the so-called experts at Wikipedia have an article about The Radio Star Murder.

Radio Star had shot to popularity in the first half of the 20th century, and was a popular fixture on the wireless back in '52. Young people would lie awake intent at tuning in to him[1], and nothing stopped him coming through. The future was bright for Radio Star, and nothing seemed to stop his inexorable rise. Aided in his early career by the fact that there was nothing worth watching on TV, he monopolized the airwaves in a fashion not seen before or since (notable efforts by the ubiquitous Oprah Winfrey notwithstanding).

In the '60s and '70s, he had to contend with a new rival - TV Star, whose hot new gimmicks included "visibility", "motion", and hippy chicks grooving along to the music. Unfortunately for TV Star though, his gimmicks at this time didn't include "endless playback of popular songs", meaning his exposure was limited, and Radio Star was able to survive this initial onslaught. However, it turned out that TV Star was just a forerunner of the much greater threat was around the corner, a threat that was instigated by those fiendish international masterminds: Freddie Mercury and Queen.

The Rapid Rise of Video

Freddie and his cohorts showed little remorse at the time

Radio Star's position at the top of the musical entertainment tree seemed impregnable. However, Mercury and his rocking chums had other ideas - they released a "promo video" for their new single "Bohemian Rhapsody". While they claimed that the video was just a promotional gimmick, released largely due to the fact that they couldn't be bothered to turn up for TV performances, the true nature of their plans soon surfaced. It quickly became clear that Video, the new star in the entertainment constellation, had all of the advantages of TV Star, but with the replayability of Radio Star. It took a little time for people to catch on to the idea, but Video was the up and coming hot young thing, and what's more, he knew it. He quickly developed tricks that Radio Star couldn't hope to compete with, such as synchronised dance routines, attention deficit editing, and the artistic use of scantily clad ladies. It quickly became clear that Mercury's bouncily-bouffanted British hitmakers had created a monster - a monster that was rolling downhill, gaining momentum, and racing out of control.

Video's popularity rose inexorably, and Radio Star's days in the sun seemed numbered. But then came the brutal coup de grace, which surprised all of those in the industry - the murder. 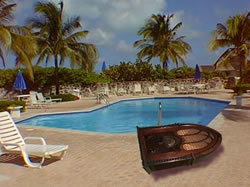 There can be little doubt that the murder was the work of Video - it bore many of his classic hallmarks, including rapid and jumpy cutting (Radio Star was found to have been cut in 340 places inside of 3 minutes), whiplash pans (he'd been hit by a pan to the face, causing whiplash), an exotic location (he was found by the pool of his Hawaii beach home), and gratuitous displays of flesh (he was naked).

Video protested his innocence, maintaining that he had no motive for the killing - and indeed, no plausible motive has ever been suggested. Video's career was in the ascendency, while Radio Star's was on the wane; Video was young, and free, and uninhibited, Radio Star could do nothing to restrict this; the two were unrelated, and Video stood to inherit nothing. Nonetheless, the public remain convinced. If asked who killed the Radio Star, even today, many will reply that Video did, which just goes to show the traumatic effect that this murder had on an entire generation.

In 1984, perhaps feeling guilty at their role in proceedings, Queen released the song "Radio GaGa", which had the front to directly refer to the unfortunate incident. Their lycra-clad frontman, in his distinctive bombastic style, declaimed in the lyrics that while Radio Star had "had the time, and had the power", he was "yet to have [his] finest hour". Friends of Radio Star were appalled. "I just can't believe they'd try to claw this back - they opened Pandora's box, and out came a murderer, and they don't have the good grace to apologise" said one, adding "mind you, it is a catchy song though - good bassline".

Radio Star's bastard son Internet Radio Star has, in recent years, started to enjoy some success of his own. Although he is unlikely to reach the heights attained by his father, he also currently seems unlikely to suffer the same fate - at least partly because his chief rival, Internet Video Star, seems more concerned with showing videos of people making fools of themselves than mounting an all-out attack on his rival[2].