The Black And White Man

“When racial riots burn on the streets... when the KKK takes your baby away... when a gangsta rapper parks his Ferrari on your garden... Who ya gonna call?”

the flabbergasting
who's your daddy?
“Hmmm... it seems to me that this guy has personality issues”

~ Captain Obvious on The Black And White Man

~ Michael Jackson on another subject

The Black And White Man was an ethnic superhero based in Bronx, New York. Like most superheroes he was concerned about regular crime but, much like his tutor Luke Cage, B&W Man had a special fondness for fighting racist organizations.

The Black And White Man was born in Tupelo, Mississippi, under odd circumstances. His mother was a colorblind KKK white supremacist while his father was a Black Panther black supremacist. With such hatred involved in his deep-drunken conception, instead of being born a mulatto his genes split by the two sides of his body, making him literally half black and half white. This weird configuration is considered to be the source of his powers, one side concentrating the gifts of blackness and the other the flaws of whiteness (original titles from the California Liberal Institute for Mutants). Another point of notice is that his brain lacks a corpus callosum, vis a vis the two sides of his brain are not connected, leading to a double personality. These physical quirks and his predictable family issues - his parents broke up when he was aged 15 minutes (counted from conception) and he was raised in an orphanage - lead to a very unusual personal life, being him the only person known to have been both a Quantum Physics PhD and a high school dropout. In other words, the white side, the one who was expelled from high school, was hopelessly dumb, scoring an I.Q. of 76, while the black side was a genius with an I.Q. of 189. According to research conducted by Professor X this has nothing to do with the genetic quality of either of his parents, both of whom were very stupid.[1] The theory is that Blacky took the left, or "rational" side of the brain, while Whitey was installed on the right, "impulsive" side.

According to Internet Mutant Database, B&W Man was a level 3 psionic (code Ps-3). He had one power for each side: 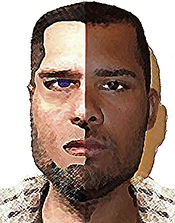 When he was 17 years old B&W Man was expelled from the orphanage after Whitey stole the principal's car (he gave an intravenous Rohypnol dose to Blacky while he was asleep). Blacky spanked Whitey as much as he could (mostly running him against a wall) and it was during this conflict that they discovered that they possessed superpowers. Whitey felt an awful odor coming from himself and thought that Blacky had maybe punched him too hard. Blacky, in turn, started to cry, consumed by a terrible guilt for hitting his brother. Perceiving the abnormality of the situation, Blacky promptly took them to Professor Xavier's School for Gifted Children (Whitey protesting: "We're not gifted, we're mutants, numbskull!").

The following is an excerpt from their school days, later published in the book "The Inner Dialogues of The Black & White Man":

“Can you turn this fuckin' gangsta rap off? This kind of shit just reinforces the worst black stereotypes!”

“I should break your teeth just for using this "N" word. Man, I am what I am and this makes me a living proof that black people are free individuals, not walking stereotypes. Yet another proof, as if proof was needed... By the way, what about you, playing this pathetic role of being a, how do they say?... Whigger!”

“I can call you nigga 'cause I am a nigga myself, dammit! One drop rule, remember?”

“And I'm making you bleed all of my drops if you don't turn this shit off. The only music I can listen to whilst studying is Johann Sebastian Bach.”

As the other mutants were confused by his double identity - no one knew whether they should act politically correct or were free to tell racist jokes - B&W Man didn't befriend anyone while in Xavier's institute. Later on, after a long discussion if he should move to New York ("I want to be next to Guggenheim" - Blacky) or a trailer park ("I wanna be next to our mommy" - Whitey), Blacky spanked Whitey yet again until the two sides compromised and moved to the Bronx, meeting Luke Cage on arrival. Cage gave him some hints on being a freelancer superhero, who to take as casual ally and who to fight. So, despite Whitey's protests, who always sympathized with the villains ("Man, this drug dealer is a cool pimp", "Look at that grillz", "Yeah, that's a hardened nigga, raping 120 white children!") B&W Man managed to get by in a life of crime-fighting.

In the Bronx Martin-Mobuto opened a tattoo shop, which also served as a cover for Blacky's laboratory and Whitey's pig farm. The tattoo shop was also an ad-hoc explanation to B&W Man weird aspect: depending on the customer being black or white, either Blacky or Whitey could turn into "a giant tattoo". 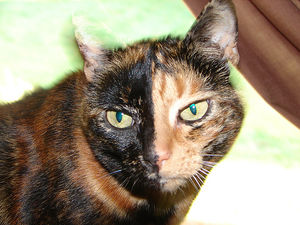 The B&W Man took part in major combats between "supers". Here goes some of his greatest adventures. 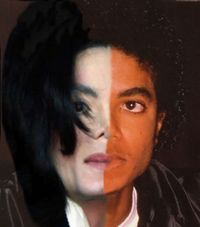 A creepy guy in a fanbase convention. His black side is also smarter thus.

Tired of the stupid names Whitey gave to his powers - and also concerned about his powers being actually stupid - Blacky built two cyborg half-bodies and performed a robot-nano-biotech surgery in order to separate him from his brother. As an homage to their previous life as a single superhero, his cyborg part is white, while Whitey's is black.

Blacky never again used his ridiculous superpower, and eventually changed his name to (he asked Whitey for a suggestion - Whitey is definitely not the creative type) The Cyborg. He also signed a contract with DC Comics and no longer owns the rights to himself. Whitey fell into obscurity and moved back to Mississippi. He tracked down their mother again and using his power made her repent of her previous racist ways. They are living a happy peasant life in their trailer and are the proud owners of sixteen guilt-ridden pigs in the backyard.

Featured Article  (read another featured article)
Featured version: 7 May 2007
This article has been featured on the front page. — You can nominate your favourite articles at Uncyclopedia:VFH.