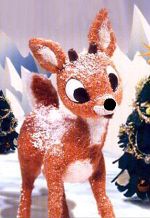 He kinda looked like this, but with a fucking red nose.

If I live to be a hundred, I'll never forget how I was almost raped by a reindeer. I mean, dude, that thing was huge. Like, WTF?

What's that? You've never heard the story of how I was almost raped by a reindeer? Well, pull up a fucking ice block and lend an ear.

comes out of nowhere and shines a goddamn red light in my face. I shielded my eyes and saw the light was coming from his nose. It was pretty fucking shiney. I would even say it glowed.

Then the freak starts prancing towards me.

so I pulled out my[edit]

knife and tried to stab the motherfucker, but he leapt ten feet in the air. Then he sorta hovered for a few seconds. I shit you not.

But that isn't the weirdest part. Soon as he came down, he tried to hump me! WTF?

Then I hear a deep voice from a distance call out, "Woah-ho Rudolph! That isn't Clarice! Ho ho ho, then go!" and then this gay little midget grabs him by the collar and runs off.

No, seriously. I couldn't have been that high.