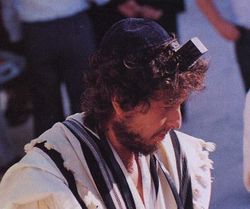 Bob Dylan wearing a tefillin circa 1990; the singer later claimed that "The times, they are a-changin'" but did not provide any data to back his contention.

Tefillin, also known as phylacteries, is a Jewish ritual item that traditional Jews wear on the forehead and/or on the arm. It consists of a black box containing a copy of the first few books of the Christian Bible, books which Jews believe were handwritten, signed, and sealed by God almighty Himself.

The tefillin is a covenant, painful but far less painful than that other covenant involving the foreskin, by which Jews remember that they are the People of the Planning Document. The only similar relic of Islamic identity, the suicide bomb, is more typically worn around the midsection.

Non-traditional Jews wear tefillin too, mostly when pretending to pray or impersonating a Rabbi.

For those without comedic tastes, the so-called experts at Wikipedia have an article about Tefillin.

Tefillin (תפיל) is derived from the word "pelilah" meaning evidence, as wearing boxes on your head is certainly evidence of something obsessive. In English, tefillin are known as phylacteries, based on the Ancient Greek phylássein, (φυλάσσειν), "a large, dead weight."

The word phylacteries has convinced some Jews that tefillin are a form of birth control, like prophylacteries. In fact, wearing large leather boxes on the head may simply be one reason why Jewish women claim to have headaches so damned much of the time.

Scripture repeatedly refers to tefillin as totafot, a word that evidently means tefillin. Scripture tells Jews that "they shall be as totafot between your eyes." What shall be? Well, it doesn't say, so scholars naturally decided that it meant to wear the scripture itself. It is not clear whether the goal of scripture was to induce Jews to become cross-eyed or nearsighted, or if something else did that. 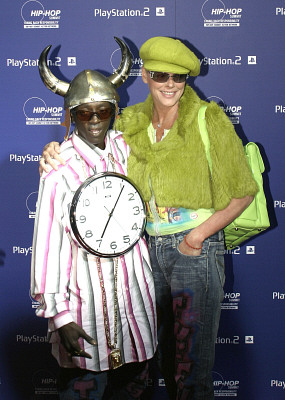 When those outside Judaism try to adopt the traditions, such as the head tefillin, often they don't quite get it right.

Hand tefillin, known in Hebrew as תפילין של יד (literally "tefillin of the hand"), is a box with a leather strap that wraps around the arm (and the hand a little bit). In Manhattan, many orthodox Jews wear an adaptation of the tefillin called a wristwatch.

Head tefillin, known in Hebrew as תפילין של ראש (literally "tefillin of the head"), is a box with leather straps that droop in front of Jews when they pray and hit their neighbors when they sway.

Both boxes contain parchment with Old Testament quotes. As the tefillin are sewn shut, it doesn't matter to you what is written on the parchment. But it matters a lot to God. That is why rabbis incessantly debate which passages should be inscribed, and in which order. You could use a laundry ticket or a shopping list. Some mischievous tefillin makers inscribe inside each box a passage that says in Aramaic: How to keep a moron busy: See the parchment in the other box.

If you stick a grocery list in your tefillin, write backwards in weird ethnic script, as shown; and list devotional foods, not just TV DNRS and LT BR.

The manufacture of tefillin is, of course, surrounded with obsessive ritual. Constructing one must be accompanied by a deliberate intention to make one; tefillin made just because your hands were getting fidgety don't count. The maker often chants, Leshem mitzvat tefillin. God can't read your mind, you know.

Tefillin must be made from the skin of kosher livestock, they must be perfectly square, and they must have Hebrew letters inscribed on them. This further indicates that they are tefillin and not just some ordinary box you have chosen to wear on your head, in which perhaps to store a little snack for tea-time. The parchment inside must be bound with kosher animal hair and the tefillin must be stitched with kosher animal sinew. If there are none available, you can use old Fido; it's not like he has cloven hooves.

The term "to lay tefillin" is used to describe the wearing of tefillin, because most people who lay tefillin do not have the occasion to lay anyone else. There is a ritual involved in laying tefillin, and in taking them off. You can't just tie those knots to your arms absent-mindedly. In cases where something else, such as a high holy day, serves the purpose that tefillin would have served--You do remember what that purpose was, don't you?--then the divine command to lay tefillin becomes a divine command not to lay tefillin.

Whether or not to lay tefillin on merely medium holy days is a subject of intense rabbinical debate.

Males over the age of 13 lay tefillin. Younger males are not considered mature enough to understand their significance, although they can still come on the field to sing the National Anthem before a baseball game, even if they botch the lyrics.

The various branches of Judaism differ as to whether God wants women to wear tefillin, He wants them not to, or He checked off Undecided/Don't know/Don't want to answer. However, the rituals spoken when laying tefillin refer to the wearer being a Jew of full status, so if women lay tefillin, they must avoid the chants and just slip them on.

The chants when laying tefillin follow the common Jewish prayer formula of "Praised Are You Lord our God who has sanctified us through many obsessive rituals." The chants may include personal thoughts, such as:

On the eighth day, a snake whipped Adam and Eve with a tefillin, and threatened their lives with larger and heavier tefillin and apples. Ever since, a secret society of snakes has made sure that Jews do not stray far from the tradition.

In 70 CE, with the destruction of the Temple in Jerusalem, Jewish women began to beat themselves with tefillin (either to mourn or to appeal to masochism). A Rabbi came along and (either finding the mourning appropriate or being a sadist) commanded Jews to wear tefillin all day long.

This got old within a millennium. A Rabbi named Rambam declared it acceptable for Jews to wear tefillin only during morning services. (Another Rabbi, named Rashi, had a few daughters who wore tefillin, as Madonna later would, but only while dancing around and around in mad circles.)

In the 18th century, Rabbi Moses Mendelsohn studied secular science and created glow-in-the-dark tefillin. Later, the addition of an iPod to the headpiece increased the popularity of tefillin, because Jews find that prayer, chants, and reading the Talmud go better when one can secretly listen to Top 40 hits.

Goyim may not have enough chutzpah to understand Jewish wit. Kvetch about it all you want, but that won't help you understand it. Fill your kepellah with knowledge more suited for you.
Retrieved from "http://en.uncyclopedia.co/w/index.php?title=Tefillin&oldid=5882476"
Categories: