Talk:All Your Base Are Belong To Us

How do you make the little boxes? I'm trying to use them in Goldfish but trying to make them work is making me mad with anger.

Congratulations for the german translations! They are even more stupid informative than the english original quotes. It shows again the vast power of babelfish which produces the most unreadable silly sophisticated results imaginable.

For added informative pleasure run the whole Article through Babelfish on German to English, its really informative, really!

Umm, why is the page blocked? I wanted to change the russian reversal to something more like a... russian reversal. – Preceding unsigned comment added by 200.71.42.122 (talk • contribs)

Thanks to last person - fixed this. --

The correct reversal is "In Soviet Russia, us are belong to all your base!"

SInce we have Bablefish, google translator also might as well be don. So I did. Only problem is, I cannot edit the article. So. Before it is flushed from my clipboard, here. (I spent 20 minutes using the already Bablefished translation.) Sorry, but I forgot the specific order I used to get this result.

The bank was started from 2101 warfares. The head of a family enemy where we live. Machinery: Let to leave the bomb. Owner: We is record. Minimum: At this event and international)

in the first, the farm it cleans.
You were consistent with this is we, with a torture must lower the foundation which is. 70
And damage the law.

Minimum: At this event. 70 document arrangements of case. Being most abundant it raises, and structural reform. Shiktarshiktarhktaraktar tortures:

Comfort and machine gun two all it is and compared to the kip decrease does not know.

Would a Borat (as in film) reference be appropriate in the article?

Can any admin add this?

Will admins please see the Russian reversal quote on All Your Base Are Belong To Us? It is supposed to be "In Soviet Russia, all our base are belong to YOU!!", with the last two punctuation marks being italicized exclamation marks as shown here or otherwise, if the text is italicized. -- 165.21.154.110 03:21, 2 December 2006 (UTC)

The bomb made me want to explode this page! But I can't! Because you locked it! CURSES! And no, I don't know how to edit these things correctly.

I know this probably isnt the right place to put this, but I cant find where that is.

Somebody set up us the bomb.

For great justice take off every zig

...Or is every new "all your base" clone now just making the page worse? Can we have a deleting spree? Don't want to do it without at least a bit of consensus. (Some) suggestions: At least two of the translations, Judaism, Enterprise, Runescape, pr0n (or improve), Console Wars, Counter-Strike, Galactic Conquest, Halo, LOTR... (And that's being kind, to be honest.) --Strange but untrue 19:04, 26 December 2006 (UTC)

Meh - got bored and decided to do it anyway. If anybody was really in love with any of the deleted things then feel free to put them back. For ease of reading, all the ones I got rid of have been abridged into the following easy-to-read compressed version:

On Stardate 90210 It were Klingons

Captain Biggun: What bubies?
Servant 1: someone set up us the Declaration of Independence
Player 1: We get holiday drop!
King Théoden: What!
Son: Main Torah open.
Captain Biggun: It's John Holmes !!
Veteran: How are you nOObs?
KLINGONS: All your geeks are belong to us!
Covenant: You are on your way to fragging.
Rabbi: What you say? ~consults Torah for information~
Player 3: You have no chance to buy this time!
George Washington: ha ha ha
Yuji Naka: SEGA!!
King Théoden: Take off every Elf.
Player 1: I know what I am doing
nOOb1: Move T.Ryu-jin.
Kirk: For...great...Shatner!

I'd like to add one of my own, but I'd like to get consent first... I'm not even sure if it'd be funny, but I made it a long time ago. It's... (shamefully) Inuyasha-based. XD

Not that I'm a fan of the show.

General guide to AYB-ing: if it's funny in a unique way, then all well and good. If it's just replacing the characters and objects with others just so you get to make them speak in broken English, there's really no reason to laugh at it. (Check the page history for examples before the killing spree.) I'm talking in general terms because I have no idea what Inuyasha is... Which, incidentally, does make me wonder if it would appeal very widely...? --

Well, going over it, it's indeed replacing characters and objects with others in relation to Inuyasha, but not to make them speak in broken english... just because I thought it could relate to AYB.
Inuyasha is a manga and anime that NEVER ENDS for great justice.
And I'm not sure on that appeal thing, but I do love making fun of it from time to time... =3
However, if it's not funny enough, then it's really not a big deal. Though I'm still hesitant on adding it... Hanyouman 18:41, 10 January 2007 (UTC)

Much as I hate to make you crestfallen... We do have loads of AYBs, so competition is stiff. And it is rather similar to some of the ones I deleted. So in the name of letting nobody accuse me of double-standards (and for great justice of course), I'm zapping it. --

Well, it is disappointing, but, I'm not going to fight against you over it, so I'll just stick with your decision despite that. I didn't think it'd last, but hey, I tried. Just so long as there is no hard feelings between us. Hanyouman 16:27, 24 January 2007 (UTC)

What do you think? It's an evil sheep! 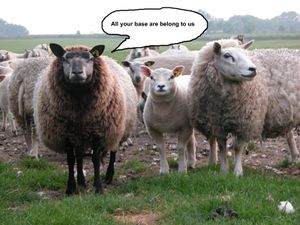 That should clearly have been "All your baaaas are belong to us". I'm not saying that makes it better or worse or anything else, just that this conclusion is inevitable. -- 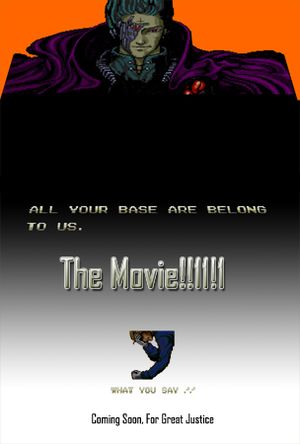 In 2007. Windows Vista was beginning

Cold War All your base is incorrect[edit]

When I used BabelFish to translate from the original Japanese text, I got this:

Western calendar 2101 fight started. Captain: Just that how it did, word it is! Engineer: No person it seems that it could set up the explosive according to.

Captain: As for you!

CATS: Don't you think? Busily so is, the ladies and gentlemen.

CATS: With the cooperation of the Federal Government troop, everything CATS received your base.

CATS: You appreciate in your cooperation.

CATS: Before making the life which at the very most remains and is little, important....

Captain: Already, only you entrust to them.

Too many unfunny AYB parodies[edit]

There are far too many new unfunny AYB parodies. I don't want to start a revert war by reverting some of them, but doesn't anyone else here agree? Ethereal 08:27, 3 February 2008 (UTC)

someone should make one based on the Eliot Spitzer scandal. just a suggestion

Again, I'm not so sure about what to do with copyright and stuff, but I think this picture would be great in this article:

I have to suggest this...[edit]

I assume the reason the page is protected is because there are so many of these, but I can't help but suggest one more.

In A.D. 2008
Election was beginning.
McCain: What happen?
Adviser: Somebody set up us the polls.
Adviser: We get phone call.
McCain: What?
Adviser: Main land line turn on.
McCain: It's you!
Obama: How are you gentlemen!
Obama: All your swing state are belong to us.
Obama: You are on the way to destruction.
McCain: What you say!!
Obama: You have no chance to win make your concession speech.
Obama: Ha ha ha ha...
Adviser: Senator!
McCain: Take off every campaign ad!
McCain: You know what you doing.
McCain: Move ad.
McCain: For great justice.

There are a lot of AYBABTU versions on Uncyclopedia now, and I was wondering if we should place a limit on the number of versions shown in the main article, while at the same time linking the Level 2 header to the example (on wheels) sub-article. -- A. Exeunt 06:29, 31 January 2009 (UTC)

Why do we now have a bunch of formulaic listcruft in place of what was once a good featured article? If no one complains within the next five seconds, I'm reverting it all. --Pleb SYNDROME CUN medicate (butt poop!!!!) 21:49, 20 February 2009 (UTC)

Oh, I didn't see that there was already an example (ON WHEELS!!!) page, so I went ahead and made another one. It shouldn't cause any harm to have two alternate pages for people to play with. After all, we have fifty articles on Jesus.
Like many, I don't like it when a good featured article gets overrun with unrelated jokes and IPcruft, but the solution is really simple: revert and maybe set up an alternate page so people can contribute without ruining what's already there. --Pleb SYNDROME CUN medicate (butt poop!!!!) 00:18, 24 February 2009 (UTC)

Wow, the hikipedia (finnish uncyclopedia) version is so much greater than this crappy article. SO MUCH SAUSAGE! Check it out for Great justice: http://hiki.pedia.ws/wiki/All_your_base_are_belong_to_us .. Main screen turn on. Most parts are in english. lolcats LOLCATS 88.112.222.28 19:14, October 25, 2009 (UTC)

Oh nooo! I have to think about historical context to understand this article! *Scratches head violently, as if trying to cope with the strain* It's just... so... originial! No memetic regurgitation or anything! *Collapses into a fetal position and cowers* How am I supposed to comprehend something that isn't filtered into a template I've seen millions of times before? Brain no can take! *Runs off crying to Encyclopedia Dramatica* --Pleb SYNDROME CUN medicate (butt poop!!!!) 02:39, October 26, 2009 (UTC)
I can now cross "De-redlink the AYBABTU article on the Finnish Uncyclopedia" off of my list of things to do before I die. Where the Wild Colins Are - LET THE WILD RUMPUS START! 23:29, October 26, 2009 (UTC)