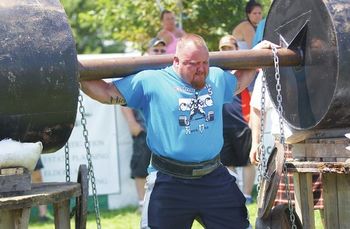 Strength athletics, also known as Strongman competitions, is a sport which tests the strength of competitors in a variety of non-traditional ways, often while they are taunted and heckled by spectators. Some of the events are similar to those in powerlifting, however, strongman competitions also test stamina with events such as carrying refrigerators, flipping truck tires, and pulling vehicles with a rope, usually while spectators shout insults at them, calling them "little girls" for example, and some throw soggy biscuits at their heads.

Competitions designed to test the strength of participants pre-date recorded history, according to historical records. The Highland games in Scotland are often recognized as the first strongman competitions, begun as a reaction to the severe taunting that men endured from wearing effeminate kilts. Circus strongmen also performed feats of strength that were non-traditional or sensationalistic, such as nearly being killed by a cannonball shot from a cannon. Strongman competitions like World's Strongest Man began their television popularity in the 1970s. 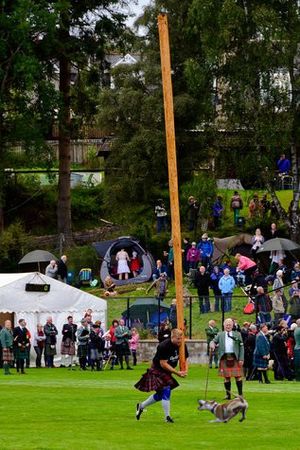 The caber in the "caber toss" had its roots in the Roman olympic games, but its roots and branches are gone, worn away with use, so it's really just a pole now.

Strength competitions pre-date written history, i.e., to before the American civil war. The first Ancient Olympic Games (running, throwing, jumping, and spitting) were held in 776 BC. There are records in many civilizations of feats of strength performed by great heroes, perhaps mythological, such as Hercules, Goliath, Popeye, Arnold Schwarzenegger, and Tarzan.

In the 18th and 19th centuries, circus-freak strongmen lent sensationalism to their acts, such as bending iron bars with their beaks, breaking iron chains worn around their hooves, and lifting heavy objects. Famous strongmen from this era included Thomas "birdman" Topham, Eugen "lobster-boy" Sandow, and Elton John.

In the 20th century, strength sports such as weightlifting, powerlifting, and superspitting were popularized through the Olympic Games. However, feats of strength akin to the circus performances also gained in popularity. David Prowse (who played Darth Vader in Star Wars) was initially famous in 1964 for his lifting the famed Dinnie Stones, the first man to be hospitalized from doing so since Donald Dinnie himself a century earlier dropped them on his foot, crushing it.

The most famous event is the World's Strongest Man competition.

The two men selected the competitors to invite and created the events that they would compete in. They chose names for the events, names like Atlas stones and Hercules Hold, that they knew would intimidate the television audience of mostly noodle-armed, pencil-neck geeks. They selected manly men who had shown prowess in the mainstream fields of strength sports and field athletics events, such as shot put, American football, powerlifters, bodybuilders and wrestlers, but not thumb wrestlers. The idea was to create a spectacle that would pit competitors against one another, and against themselves, and against the spectators.

The show was enough of a success that it began to be replicated in other countries, such as Britain's Strongest Man (1979). Competitors began shifting from unpaid amateurs to professional strongmen. By the end of the 20th century, and in to the 21st, other strongman programs and events were created, such as: the World Muscle Power Championships, World Strongman Steroid Challenge, Arnold Strongman Roid-Rage Classic, Live Giant Mutants, Soggy Biscuit World Championships, World Strongman Federation, and Europe's Strongest Non-robotic Replicant. 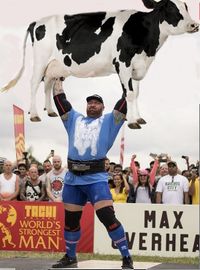 Strongman Gregor Clegane (aka "The Mountain") lifts a cow.

In the cow lift, athletes try to do the most "clean and jerk" repetitions with a cow in under one minute. The cows are treated humanely and are not injured during the event - unless they are dropped accidentally - and in that case, the cows are very severely injured - breaking most, if not all, of the bones in their bodies. When that happens (and it happens a lot), new cows are provided and the broken cows are piled up in a nearby field.

Farmer's Walk – competitors race along a course while carrying a heavy weight in each hand (typically 55kg), while also drunk and completely naked. A variation is the Giant Farmer's Walk, with a much heavier weight carried over a shorter distance.

Atlas Stones – a juggling event whereby five 50 kg (117 lbs) spherical concrete stones are juggled for as long as possible while standing on one leg and singing "She'll be comin' around the mountain." Alternatively, the stones are lifted over a bar for reps. This event is named after Atlas, a famous Greek juggler who had performed at the Zeus Country Bunker club in ancient Greek mythology.

In this event, athletes try to find a spectator with the name Fingal, or a similar name, and then they rip off as many of his fingers as they can in under one minute.